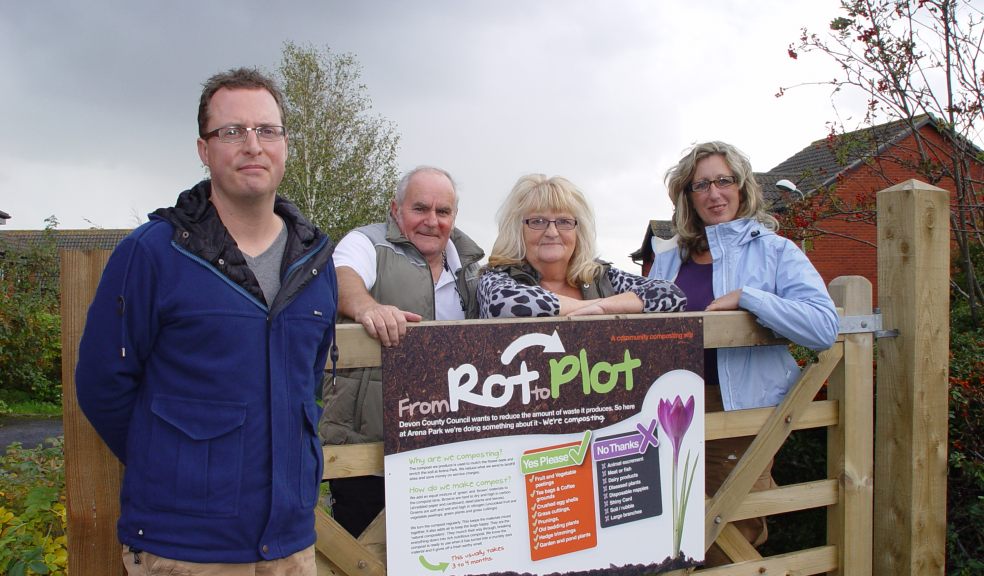 102 properties at Arena Park in Exeter are benefiting from a successful community composting site.

To help address fly tipping of garden waste, advice was gained from Devon County Council and the Community Composting Network back in February 2012 following residents' request at an estate walkabout. Devon & Cornwall Housing provided two ‘scotty hot box compost bins’ to see if this would help alleviate the problem.

Several months on and the scheme has proved so successful that the volunteer residents who oversee the site applied to their local councillors for funding to provide more compost bins. Exeter City Council provided two dalek style compost bins free of charge and Exeter City Council’s Community Grants scheme assisted with funding for four more, which were delivered last month.

Cllr Rob Hannaford, Lead Councillor for Housing and Social Inclusion, said: "We're delighted to be able to support this scheme, which not only benefits the environment but at the same time engenders a good community spirit and cuts down on garden waste either being dumped or sent to landfill. All in all it’s a win-win situation for everyone."

Nicky Scott from the Community Composting Network said: “It’s so inspiring to see these communal composting sites springing up over Devon thanks to the enthusiasm of Devon & Cornwall Housing. More people realising that composting is really simple to do and creates such a wonderful product is such a valuable activity, and besides all that, it is stopping all that material being wastefully disposed.”

Dave and Kathy Coles, residents from Arena Park who oversee the community composting scheme said: “It’s great to see the majority of the properties here using the composting site which is keeping the estate tidy. The scheme saves the expense of hiring wheelie bins and also cuts costs on compost by recycling waste. By next season the compost will be ready to use on the shrubs and flower beds around the estate to help get the area blossoming for summer.”

The ‘scotty hot box composting’ system is specifically designed to reduce food, garden and kitchen waste to reusable compost. An information panel provides detail to residents on what can and what cant be composted in the site and is overseen by resident volunteers and the Arena Park Grounds Maintenance Contractor Sylvia Massey.

Anne Wallace Neighbourhood Manager at Devon & Cornwall Housing said: “This is a great example of how residents can achieve real community benefit by working with us and with outside agencies to create an improved neighbourhood. Their actions will have enthused others to get involved, encouraged responsible disposal of green waste and reduced fly tipping which will have a beneficial environmental impact.”

Considerable consideration was given on where on the estate this facility would be best placed, the visual impact it might have from a resident perspective and how best the area should be prepared for successful management.

Households in the immediate vicinity were consulted to see if they had any objections and funding was provided from Devon and Cornwall Housing’s estate improvement budget, to fence the area, prepare the ground and purchase the compost boxes.