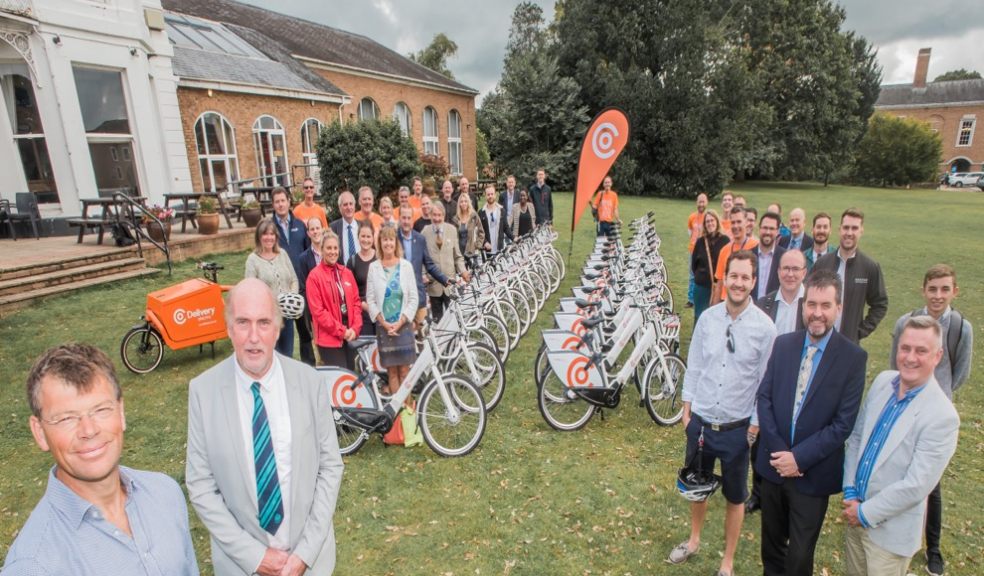 Guests were invited to County Hall where the first 25 of the brand new bikes were lined up prior to being deployed at stations around the city. A number of gueststhen joined Co Bikes representatives for a bike ride through city centre locations including Princesshay and the High Street. Here, they attracted lots of attention from lunchtime shoppers and office workers.

The bikes were then returned to County Hall ready for distribution to the first five of the stations to reopen. These are: County Hall, Civic Centre, St David’s station, Central station and the University of Exeter’s Streatham campus. The two remaining existing stations (Digby & Sowton station and University of Exeter’s St Luke’s campus) are due to reopen within the next couple of weeks.

Mark Hodgson, Managing Director of Co Bikes, also used the event to announce the first of Co Bikes’ new stations. These are: Heavitree High Street, Cranbrook Younghayes Centre and Pinhoe station. Heavitree and Cranbrook are scheduled to open during September with Pinhoe following in early October.

The expansion of the Co Bikes scheme is possible due to a partnership with Devon County Council who secured external funding from the Department for Transport’s National Productivity Investment Fund (NPIF) and developer contributions from new residential developments in Exeter. Together, these have helped to deliver the new sites and improve infrastructure at existing sites.

“By giving people more sustainable travel choices we are helping to improve the environment for all of us and I look forward to seeing this scheme continue to grow around Exeter and other locations in Devon.”

Mark Hodgson added: “We were the first on-street electric bike hire scheme in the country and are still the largest one out there in the UK. Of course, being a pioneer at anything is not without its challenges and I’d like to personally thank Devon County Council for their ongoing belief and support in what we’ve set out to achieve.

“Co Bikes are perfect the perfect solution for urban journeys as riders can tackle the toughest of hills without breaking into a sweat. This means they are ideal for commuters, for getting to meetings, for running errands or simply just for fun.”

“We are also unique in that Co Bikes are designed to work alongside our hire-by-the-hour Co Cars to deliveran affordable and sustainable shared mobility network. This network helps create space for people by reducing the need for private car ownership and the associated pollution and congestion.”

Co Bikes are powered by nextbike, who operate shared bike schemes in 200 cities around the world. Krysia Solheim, Managing Director of nextbike UK, commented: “We're delighted to be providing electric bikes for Co Bikes in Exeter. After setting up the first electric bike scheme in the UK two years ago, Co Bikes' ambition continues to lead the way in offering reliable sustainable transport alternatives.

"Electric bikes are a great way to open up cycling for people who might not feel confident enough on standard bikes or want to travel across the city easilyand we're sure the scheme will be well-received."

Co Bikes can be hired using the nextbike app and cost just £1 per 20 minutes or £24 for the day (8-24 hour hires) 1. To end a hire, bikes must be returned to any Co Bikes station. Anyone who downloads and registers to use the nextbike app between now and 30 September 2019 will be entered into a draw to win a year’s free cycling using Co Bikes. There will also be 10 runners up prizes of a month’s free cycling2.

Co Bikes is part of Co Cars, the car club for people, communities and businesses across Exeter and the South West. In Exeter, Co Cars currently has nearly 30cars available to hire from as little as half an hour. Together, the cars and bikes form an economical, equitable and sustainable network of shared transport options to help reduce the dependence on private car ownership.