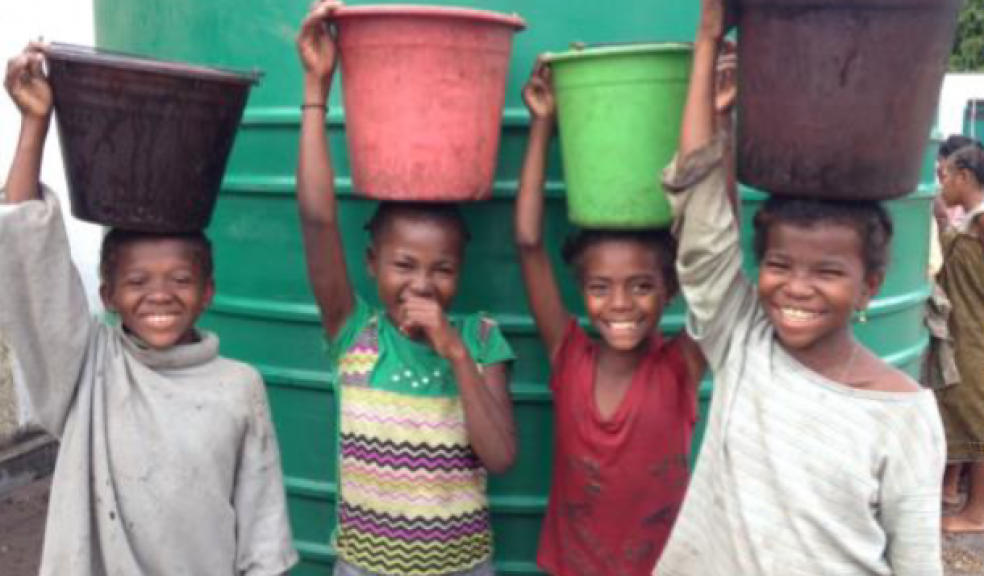 The taps have been turned on at an exciting rainwater collection project, managed by an engineering graduate from Exeter University, in the area of Sainte Luce in South East Madagascar.

The project, named Project Tatirano (meaning to ‘collect rainwater in Malagasy), has been running a pilot scheme for the last 12 months at a local school in Sainte Luce, aiming to provide clean drinking water for both the children at the school and those villagers who live nearby.

Harry Chaplin who studied Civil and Environmental Engineering at Exeter, was the brains behind the project.

Involving swapping the rusted school roof for a new galvanised corrugated metal one and installing large plastic gutters along each length to collect water and distribute it into two 10,000 litre plastic tanks, the project’s beauty lies in its simplicity.

The system’s cleansing system is efficiently rudimental, relying on a ‘first flush’ arrangement, whereby the initial water to come off the roof is used to wash away any debris or dust that may have collected and diverts into a separate tank, which is automatically cut off when full by a plastic ball to allow clean water to then run into the drinking tanks.

No pressure system is needed as the ground around the tanks has been cut away, such that taps can be fitted to allow gravity to do its thing.

Whilst the concept may be simple the ramifications are profound. Over 2000 children a year die in Madagascar from diarrhoea from contaminated water sources and poor sanitation and one of Project Tatirano’s major goals is to dramatically reduce the faecal coliform count in water consumed by locals.

Testing has shown that the local well, 20 metres away from the school, has a disturbingly high count of faecal bacteria coliform - which causes diseases such as Cryptosporidium, Salmonella, Giardia, Compylabacter, most of which shows itself as diarrhoea.

The system’s simplification is also what allows for the next exciting stage of the project to be implemented. It aims to install water collection units onto the roofs of 200 homes throughout the local area; its simplicity allowing for home owners to erect and manage the systems themselves.

This Saturday marks the beginning of this second phase of the project, but also the handing over of the pilot school project to a community-elected committee; a vital part for the self-sufficiency of the project.

The handing over comes after a recent ‘distribution day’, which highlighted the success of the pilot project. The taps on the system were opened for two hours and the entire community invited to collect as much water as they wanted.

The Project distributed over 3,500 litres of clean water to the entire community of 750 people - filling every bucket/jerry can in the village.

What was most satisfying for the project organisers was to see people queuing up with their buckets and jerry cans for over half an hour, even when the well 20 metres away (where they usually get their water) was available, highlighting people’s understanding of the scheme and its importance for their health.

To find out more about the project and how you can get involved, or contribute to ensure its continuation, please visit www.madagascar.co.uk/projects/community-health/tatirano

A short video on why this kind of project is so desperately needed in Madagascar can be found here - https://youtu.be/2RK7XS8PUQ0