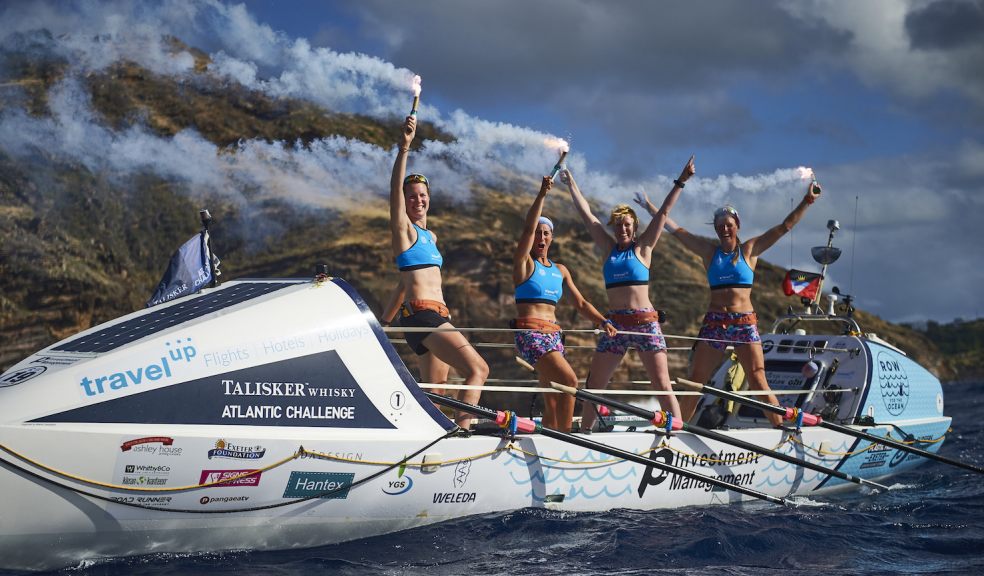 Row for the Ocean has completed the world's toughest row to raise awareness of ocean plastic pollution for South West charity Surfers Against Sewage.

The four-woman team, three of whom belong to Exeter Rowing Club, were the first all-female crew to reach the finish line of the 2018/19 Talisker Whisky Atlantic Challenge.

With 3,000 miles behind them, the ocean adventurers arrived in Antigua after 43 days, 2 hours and 20 minutes at sea.

Kirsty Barker (28), Kate Salmon (31), Rosalind West (36) and Laura Try (36) were continuously challenged - with early seasickness and power issues - and had to dig deep, physically and mentally, as they battled for position against four-man team Atlantic Seaman. Row for the Ocean pulled ahead to take tenth place in a close race to the finish with only 2 hours between them.

On their journey of self-discovery, Row for the Ocean had whales follow their boat for 30 minutes. This amazing moment was tainted by the fact that the rowers saw plastic every day on their crossing, which is why their cause for Surfers Against Sewage is so important. The money raised will help the charity to invest in protecting and cleaning up the ocean environment, making sure it can be enjoyed by generations to come.

Each crew member shares a genuine connection to the outdoors and the sea. Laura works for an ocean rowing boat builder and only took up rowing as she approached the age of 30; Kate is a Scientific Consultant for the Met Office, and Ros and Kirsty both grew up by the sea. Before the team set off from the Canary Islands to embark on the adventure of a lifetime, they were campaigning to make Exeter the UK's first plastic-free city by 2020 which they will continue to do now they’re back home.

Skipper Rosalind said: “We rowed an ocean to save the ocean, to put it simply. We did see plastic pollution in the ocean during the race, more plastic than wildlife, which was upsetting at the time as there wasn’t much we could do there and then. However, this is why we signed up to the race – to raise awareness of how much our seas are damaged by this unnecessary pollution, and how with small steps we can all change this. Seeing it out there first-hand had a big effect on us all.”

The row may be behind them, but the fundraising continues: https://www.justgiving.com/fundraising/rowfortheocean