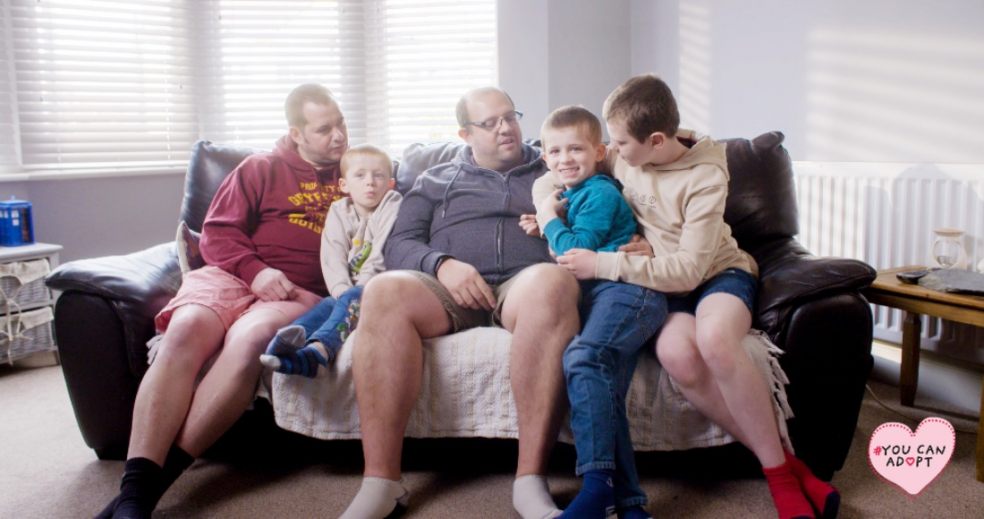 Latest figures show there are currently 2,020 children waiting to be adopted in England and, of those, 44% are in family groups of two or more. Groups of children wait an average of 17 months to be adopted, which is 36% longer (135 days more) than individual children. More than half of these groups (56%) even wait more than 18 months for their new family. For many potential adopters, this is due to groups being slightly older and worries about financial affordability, physical space, and it being too challenging.

In Devon, Plymouth and Torbay, there are currently 20 sibling groups waiting for adoptive families.

To encourage more people to consider adopting brother and sister groups, national, voluntary, and regional adoption agencies across the country have come together to launch a new nationwide #YouCanAdopt campaign that highlights the benefits of adopting more than one child and celebrates the irreplaceable bond of brothers and sisters.

New research, commissioned by adoption agencies and released as part of the campaign, has found that in the South West, the majority 66% say it’s important to grow up with brothers and sisters. In the regional survey of 172 people, 62% say having brothers or sisters has positively impacted their lives or their wellbeing.4

A further survey of those that have adopted, or are considering doing so, found that a key reason to adopt is to extend, or to start, a family (58%). Despite this, more than a third (34%) of adopters do not consider adopting brothers and sisters.

Ruth Marriott, CEO of Families for Children Adoption says, “Most of the sibling groups waiting for adoption are two children who want to stay together. Research indicates that it is often in the best interests of the children that they do stay together as separation could result in further traumatic experiences and anxiety for them.

“Adopting a sibling group may be a daunting prospect, and while there will be challenges the benefits and rewards for both parents and children are huge.”

According to adopters, the biggest challenges and concerns about adopting brothers and sisters are that it would be too challenging (30%), affordability (21%), and the worry about not having enough space at home (20%).

While challenges exist, there is a significant amount of support available to potential adopters – from financial to practical – and the vast majority (88%) of parents that adopted family groups say challenges are far outweighed by the positives. Many (61%) go as far to say that adopting children with their brothers or sisters has been the most beneficial factor in their children’s adoption journey; with benefits including increased reassurance, companionship, comfort, and settling into family life more quickly.

Kath Drescher, Head of Adopt South West, says: “We need adopters for children of all ages, brothers and sisters, and children with extra needs. The biggest worry around adopting a family group of children is that people don’t have a big enough house or enough money to adopt brothers and sisters. We are particularly looking for adopters for sibling pairs and groups and we can offer an Adoption Support Package when children are placed with you, as part of your assessment.

“If you can provide a safe, stable, and loving home for a child or children, and have a spare bedroom, we would be keen to hear from people to discuss their interest and explore what support they might need.”

Amber and her husband from Devon adopted a brother and a sister: “For us it was easier to have two adopted children than one. They always have each other for company and for mutual support. They will never be 'the only one' and they will have shared history. We also feel that it is better for the birth parents to know that their children are together and have each other.

“It's lovely to see the children's growing relationship,  and to know that they will have each other even when we are no longer here.”

Same sex couple Joe and Reece, adopted a group of 3 brothers and sisters, “We always knew, coming from large families ourselves, that we always wanted to adopt sibling -we wanted a big family.  Doing our research, we found out that sibling groups were, in a way, not easier, but they have each other, they've been through experiences together.

“When they're going through the transitioning, a sibling group can get support from one another, they're familiar with each other. So, when their world changes, they've got each other in that whole change and they can support one another.

“We do know as we get older there will be different challenges that will come up and certain situations, especially adopting a sibling group, but the main thing is we have the support from our adoption agency, our families and friends and other adoptive families. You know you’re not alone.”

A new podcast episode featuring singer Sinitta, who adopted a brother and sister in 2007, has also been launched as part of the campaign. The episode explores the unique family bond her children have and how this has impacted her adoption experience.

Sinitta, mum to Magdalena and Zac aged 15, said: “I always knew I wanted to adopt a family group and not for a second have I regretted my decision. As a pair, they bounce off one another showing love, affection, support and humour like no other relationship would be capable of fostering. The bond they have is second to none, and it’s unimaginable to think how one could cope without the other if they were to be split in the adoption process