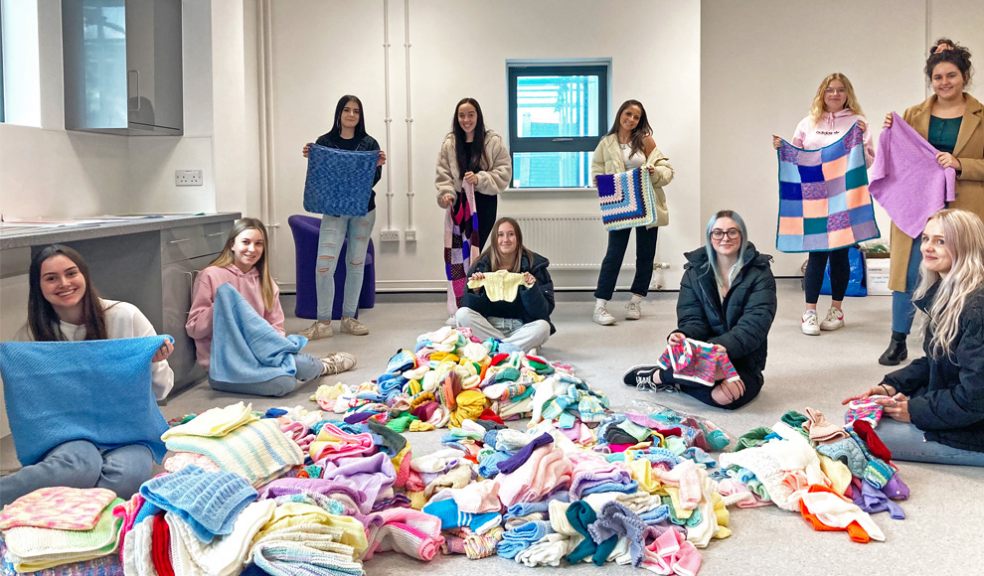 A group of charity-minded Exeter College students have been inundated with knitted clothing after a post asking for donations went viral on Facebook.

A tutor group of Health and Social Care students have been collecting various knitted items for distribution to neonatal units around the country to help keep babies that are premature or with additional needs to stay warm in the days after birth. Students had planned to contact a few local knitting groups to help create small knitted hats, gloves and blankets but after a poster found its way on to Facebook the request has gone viral, resulting in an influx of donations from across the country.

Second year Health and Social Care student Holly Barclay had her address on the poster that went viral asking for donations, resulting in a few days of her family home being swamped with new knitted products.

“I had made a small poster with my home address to just put around a few notice boards in our village but someone local put it on Facebook and it has been shared by over 1,000 people now.

“We don’t even know how many donations we’ve got altogether now but they’re all going to a great cause.”

Sidonie Andrews, who is also in Holly’s class, said, “We all wanted to do something to give back to the community but one that stood out for us was to do something for babies in neonatal care.

“For me, it was a good idea because when I was a baby I was in a unit with a condition and I know how important it is. I also know how to knit so it all seemed to fit together. Some of us in the group are interested in that area of work so it has helped us all as part of our course as well.”

The group of 17 and 18 year old students, who have also been learning to knit themselves, will be sending the donations to the charity Bliss, who help babies born premature or sick. Bliss is partnering with the Sun on Sunday on their Knit A Lot, Save A Tot appeal, supported by East London Textiles Ltd and The Big Yellow Self Storage Company; you can find out more about the campaign by going to bliss.org.uk/blankets. The items will then be quality checked and sent to neonatal units across the country to help those in need.

Health and Social Care Programme Leader Grace Parker said, “Every year in my tutor group we run a community project to give something back in the run-up to Christmas and this year the students came to me with this idea and have just run with it.

“All these students are on a course that prepares them for jobs within health and social care so they all recognise that neonatal units are such a vital thing to be able to support – especially with the NHS under so much stress at the moment.

“Bliss have been really supportive of our efforts and they’re currently running a national campaign for blankets but finding places where our knitted hats and gloves can go too.”

Donations have been pouring in from across the country, with knitted items arriving from Kent, Leicester, Lincoln as well as some of Exeter College’s own employees knitting for the cause.

Holly concluded, “With everything that’s going on at the moment with Coronavirus we just think it’s a nice thing to do and it brings us all together.”

Applications are open to join Exeter College in September 2021.