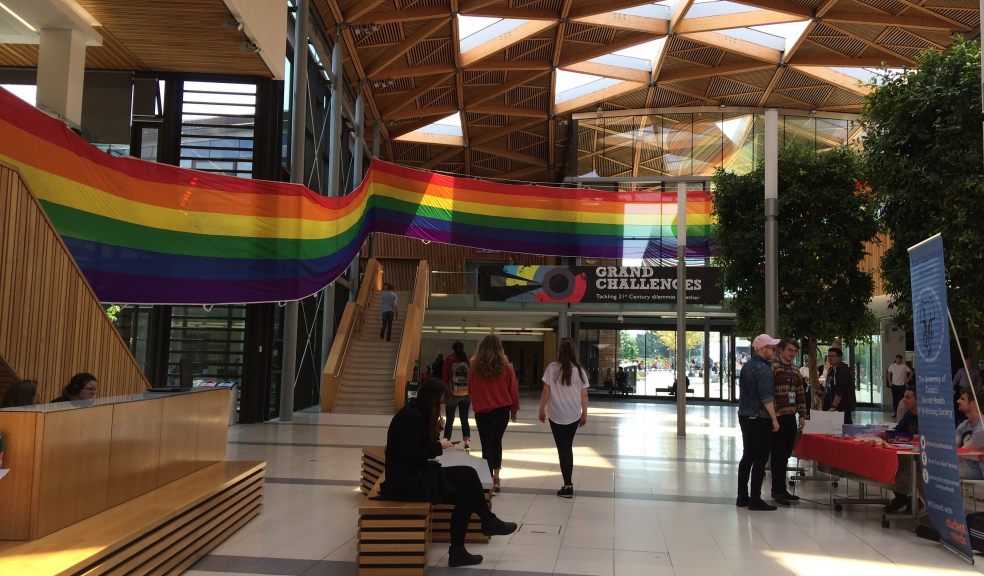 Rainbow flags are flying at the University of Exeter’s campuses this week as staff and students mark Exeter Pride.

The University is a key sponsor of the event, which celebrates lesbian, gay, bisexual and transgender (LGBT+) communities and is honouring the occasion through proudly flying the emblem and hosting a Pride on Campus event to raise awareness of the staff and student LGBTQ+ networks.

A giant rainbow flag has been wrapped around the inside of the University’s Forum building, and they are also flying outside the Washington Singer building on the Streatham campus and at the St Luke’s campus on Heavitree Road.

The Exeter Pride parade will be held in the city centre this Saturday. University of Exeter staff and students will take part in the march. There will also be a series of our debates and talks on LGBT+ history and issues by academics Jana Funke, Jen Grove and Joao Florencio. The researchers will discuss how to talk about LGBT+ issues in the classroom and run a workshop for young people, and also highlight research on the AIDS crisis and lesbian and gay literature.

Anne-Marie Baker, the University of Exeter’s Wellbeing and Equality, Diversity and Inclusivity Manager, said: “We are delighted to support Exeter Pride, and also to highlight the world-leading research on LGBT+ issues, literature and education being carried out by academics at the  University of Exeter.

“The rainbow flag looks spectacular and we are proud to fly three around our campuses. The mammoth flag currently in our Forum building will be carried to the city centre to take centre stage in the parade.

“Exeter Pride reminds us all of the importance of having inclusive communities so everyone is free to be themselves, reach their potential and fulfil their ambitions. It also allows us to reflect on how much progress we have made in creating a more LGBT-inclusive society. We also fly the rainbow flag for those around the world who don’t have the freedom we enjoy.”

The debates and talks take place between 1:30 and 5pm as part of the Exeter Pride Programme in Exeter Library and Studio 74 at the Exeter Phoenix.