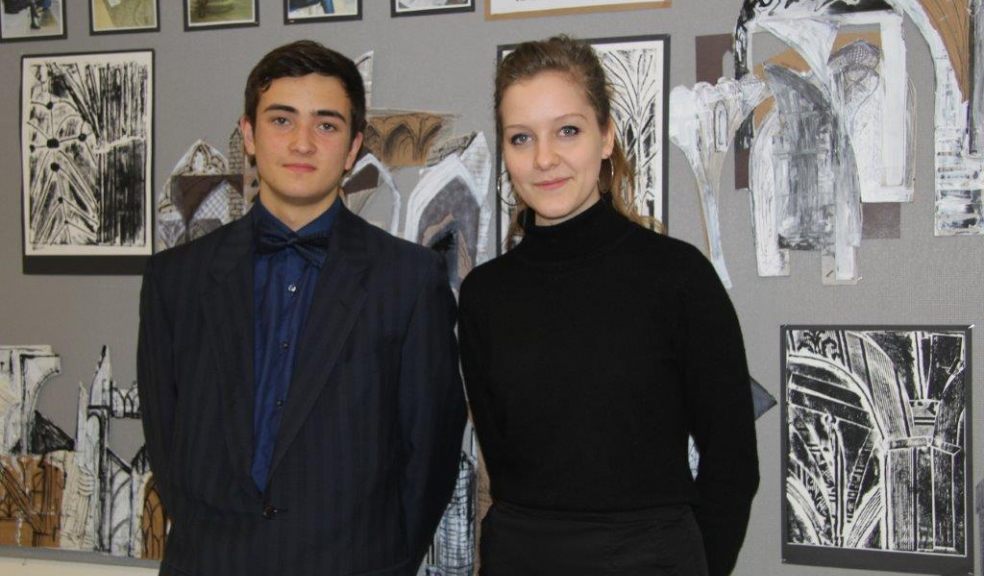 Exeter School is proud to announce that two of its pupils have been offered places in the field of the arts.

Upper Sixth pupils Daniel Hambly and Clara Finnigan have been offered degree places for September 2015 at The Architecture Association and the London College of Fashion, respectively.

Head of Art, Miss Alison Dyer, said: "We are very proud of the pupils' achievements as the application and interview process for both institutions is very rigorous and the competition for places is incredibly fierce.

"The outcome is the result of considerable preparation and wider reading and the offer of a place is a fantastic accomplishment for both pupils."

Daniel has been offered a place on a five-year Architecture course. He was said it was his first choice and he felt privileged to be one of just ten British students to be accepted into first year "I studied Art because I'm interested in design from a technical and artistic perspective," he said.

"It is a dream come true to follow in the steps of AA alumni such as Richard Rogers (the Cheese Grater), Zaha Hadid (London Olympic Park) and Sir Nicholas Grimshaw (Eden Project) to name but a few famous architects.

"My ambition is to help bring new modernism to the emerging economies."

He was said he was indebted to Exeter School and in particular his Art teachers for providing him with the necessary guidance and encouragement needed to prepare me to a standard acceptable for the AA.

"I will leave this year with fond memories," he said.

Clara said she was over the moon to have been offered a place on a four-year MA in Fashion Media Practice and Criticism at London School of Fashion.

"Fashion has always been a great passion of mine, so to have been given the opportunity to study the subject in one of the fashion capitals of the world is the most wonderful news," she said.

"Exeter School's fantastic Art Department has given me the tools to discover the depths of my creativity, and the knowledge that art, as the reflection and analysis of life and one's own identity, is an incredibly important subject, which should be highly valued.

"My plans for the next four years are to immerse myself in the subject I love and have lots of fun!

"Beyond university I hope for a successful career in the fashion industry, whether that be in fashion journalism, curation or styling and photography."