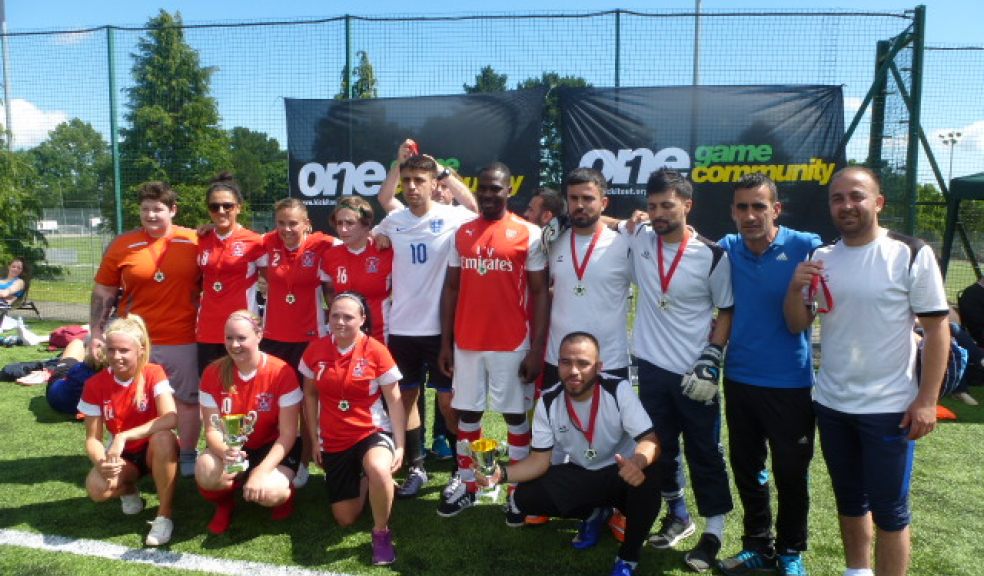 Callington won the Women’s competition, winning every match they played. They beat Tedburn St Mary based Inter M’Ladies 5-1 in the final. In the semi finals Callington defeated the All Blacks from South Devon 2-1 and Inter edged out Buckland, also by 2-1.

In the Men’s competition Afghan United became the first team to win the title three times, having previously won the tournament in 2008 and 2009. They beat Kurdish side Azad Turkan 9-1 in the final. The Afghans had defeated Heavitree 8-2 in the semi-final while Azad won 3-2 after extra time against Exeter side Head Girls.

The 5 a side competition was organised by Exeter City Supporters Trust’s One Game One Community Group and Exeter City’s Football in the Community team. It took place at the University of Exeter’s Streatham Sports Complex.

The tournament, now in its 12th season, encourages participation from local community teams and especially black and minority ethnic players. The event attracts players from many different parts of the world and this year saw Trinidad and Tobago, D R Congo, Togo, Ivory Coast and Nigeria amongst those represented. Devon’s gay friendly team, the Devon Lions also took part.

Support for the tournament came from the University of Exeter, Devon FA, Tesco, Kick it Out, Exeter City Football Club Football in the Community and Exeter City Supporters Trust.

Exeter City’s One Game One Community Group is part of the national Kick It Out campaign which aims to address all types of discrimination in football including race, disability, gender, age, religion and sexual orientation.

“This was our biggest ever tournament and once again a flagship for diversity and equality” said Martin Weiler for the One Game One Community Group.