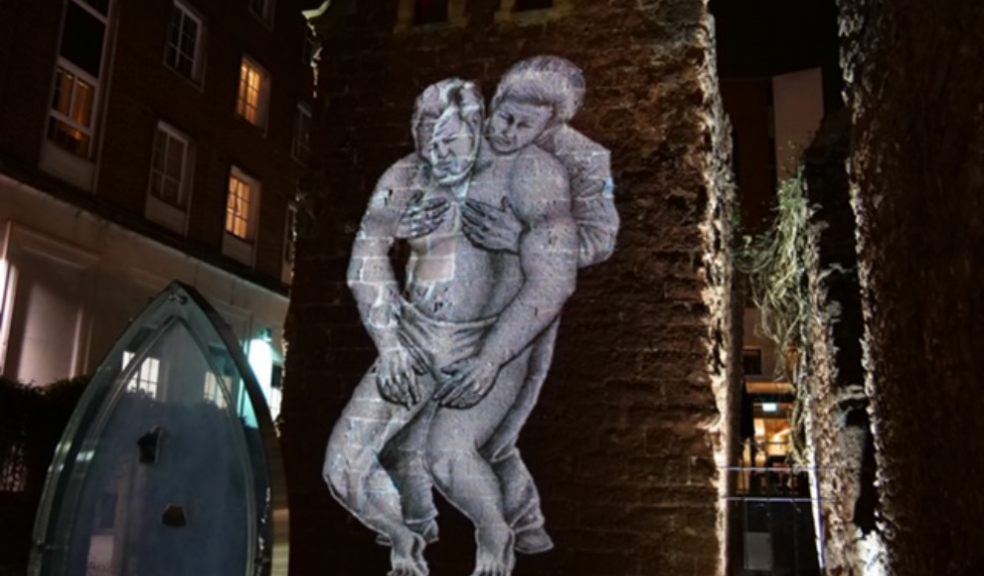 Local artist Leo Jamelli has collaborated with the University of Exeter to create a piece of emotional public artwork to be displayed in City Centre.

The large-scale artwork, created to celebrate carers, will be shown between 8.00pm and Midnight on both 20th and 21st September. It will appear on the historic St Catherine's Almshouse, on the site of the iconic ruin in the Princesshay shopping precinct.

Funded by a University of Exeter Arts and Culture Fellowship, Leo's artwork is inspired by research currently being developed by Dr Catriona McKenzie and Dr Siobhan O'Dwyer as part of a Wellcome Trust Small Grant.

Leo's previous works raised awareness of the sacrifices made by service men and women during World War One and were projected onto landmarks in Exeter, Bristol, and Plymouth.

Artist Leo Jamelli said: "Caring is a subject close to my heart having seen first-hand the hard work that carers put in to looking after loved ones. I hope that with the Invisible Carer installation I have created an insightful piece of visual public art that will raise public awareness as well as help invisible carers to feel valued and recognised."

The Wellcome Trust project saw archaeologists, anthropologists, and historians working with health researchers, carers, and community organisations to establish a family care research network and develop plans for research to understand the history of family care. The researchers think lessons from the past – including skeletal evidence of care from the Neolithic period and diary entries and letters about care from the Middle Ages – as well as care practices from different cultures, might be the key to better supporting carers in the UK today.

Dr Siobhan O'Dwyer, Senior Lecturer in Ageing and Family Care, said: "There are nearly nine million carers in the UK and they save the government £132 billion each year. But this valuable work – and the toll it takes – often goes unseen. So we're delighted that Leo's art is literally shining a light on family carers. We hope it will help carers feel seen, and start conversations in the community about the value we place on care. It's also a powerful and creative way to connect carers and the wider community with the care research currently underway at the University of Exeter."

Dr Catriona Mckenzie, Senior Lecturer in Human Osteoarchaeology, the study of human skeletal remains, said: "It has been a pleasure to work with Leo Jamelli throughout his fellowship. His work highlights the invaluable work, undertaken by family carers in households across Exeter and the UK."

The Invisible Carer is a free public artwork, on display at the St Catherine's Almshouse (EX1 1EU) from 8.00pm until Midnight on 20th and 21st September. The piece is also suitable for indoor exhibition and if you are interested in hosting it, please contact Leo Jamelli.