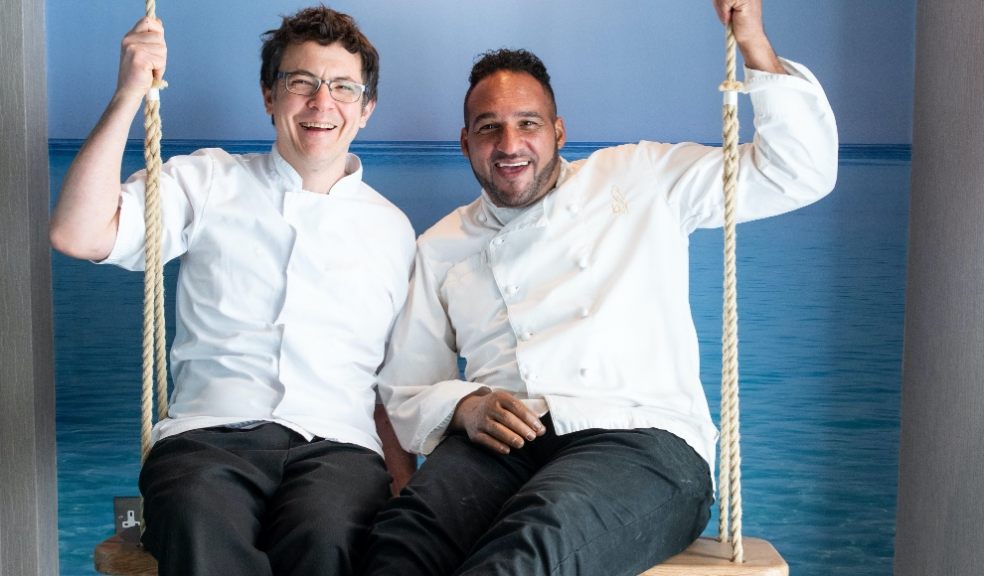 After working together for over 15 years, Sylvain Peltier and Michael Caines are turning their dream into a reality by bringing together their brand new concept; Café Patisserie Glacerie to Exmouth beach, with doors opening on Tuesday 13th April.

Cafe Patisserie Glacerie sits on the new Sideshore development alongside casual bar and destination eatery, Mickeys Beach Bar and Restaurant, another exciting addition to the Michael Caines Collection launching when UK restrictions ease in May.

This latest venture, champions and celebrates the Art of Coffee, the Art of Patisserie and the Art of Gelato and all things artisan!

With pastel hues of blue, pink & green interiors and boasting a comfortable space inside and out with stunning beach views, this patisserie paradise is an Instagrammers dream, as are its spectacular culinary creations. With the topping station, and even a kitchen port hole to glimpse into the artisan’s homemaking the goods, you will quite literally feel like ‘a kid in a candy store’.

Delight at the creations on offer from a range of French patisseries, including layered viennoiserie such as croissants, and pain au raisin handmade with lashings of good Devon butter. In total, 16 flavours of handmade Italian style gelato will be churned on the premises from rich Devon Milk and cream crafted with the traditional Italian flavourings and delicious cakes handcrafted by Sylvain Peltier. Savoury goods will include traditional Cornish pasties by Barnecutts Bakery, Tom’s famous Devon pies and fresh handmade sandwiches. There will be an abundance of daily guilty pleasures for locals and tourists alike to enjoy.

Keeping in line with the green ethos of the Michael Caines Collection, Michael says the eatery will source local produce to support the community of food producers and farmers, reduce food miles and promote biodiversity, along with a commitment to reduce single-use plastics.

Café Patisserie Glacerie is a partnership between Sylvain Peltier and Michael Caines. The duo have worked closely together over two decades, in former Michael Caines restaurants and café bars in Exeter, Bristol, Glasgow, Canterbury, Manchester, Chester, and Abu Dhabi, as well as at Michael’s flagship Lympstone Manor which holds one Michelin star and at Michael’s two restaurants in Cornwall, The Cove at Maenporth and the Harbourside Refuge at Porthleven. This is their first joint venture as they bring their incredible joint talents to Exmouth seafront where they can be enjoyed by all, whether as takeaway to relish on the beach, or seated indoors or out on the Sideshore terrace overlooking Exmouth seafront and Lyme Bay.

“Café Patisserie Glacerie is a celebration of Sylvain’s artisan skill, creativity and originality,” says Michael. “His modern French pastries are totally unique: you simply won’t be able to find or taste them anywhere else. We will be bringing something very special to Exmouth seafront and we can’t wait to share Sylvain’s creations with the world.”

Sylvain says, “Michael, holder of 2 Michelin stars for 18 years and now with 1 star at Lympstone Manor, I have so much professional respect for what he has achieved throughout his long and prestigious career. I am now thrilled to be working with Michael as a partner in our new joint business venture, Café Patisserie Glacerie. Sideshore is such an exciting venue and I am delighted to be able to share my pastries and gelato with Exmouth locals and visitors alike.”

The Café Patisserie Glacerie concept is owned by Sylvain and Michael’s joint business venture French Pastries Ltd with other sites planned for the future, these are exciting times for the newly launched concept.

With the lockdown restrictions coming to an ease, Café Patisserie Glacerie couldn’t have arrived at a better time - just when we most need an uplifting treat or two!

Café Patisserie Glacerie will celebrate its official opening on April 13th at the Sideshore development on Exmouth Seafront.