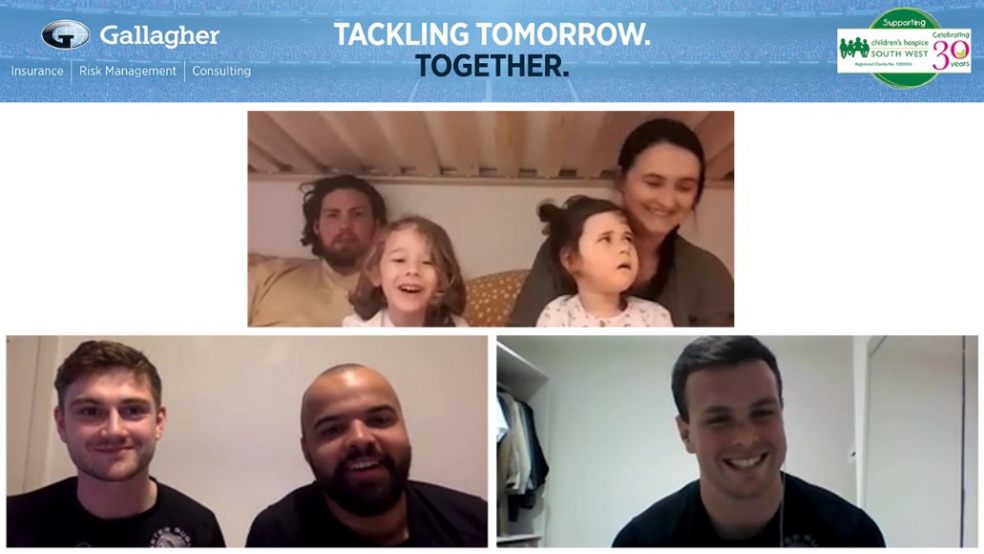 Keen to give back to the local community, the Exeter Chiefs players popped up unexpectedly via Zoom to read bedtime stories to children with life-limiting conditions and their families who are cared for by their local hospice, as well as bereaved families who still have strong links with their hospice. The children and their families were treated to a reading of Jack Maunder’s motivational kids’ book ‘Bounce Back Jack’, and afterwards chatted about the players’ personal experiences of times when they have overcome setbacks and shown resilience.

The story-telling session was organised as part of Gallagher’s UK-wide ‘Tackling Tomorrow Together’ initiative, which sees the insurance broker bring to life the recent stories of six UK businesses and charity Children’s Hospice South West. In recognition of its resilience, tenacity and pioneering spirit during the COVID-19 pandemic, the charity has been paired with both Exeter Chiefs and Bath Rugby, as Gallagher aims to give them a boost in exposure through its partnership with Premiership Rugby.

A highlight of the session was Joe Simmonds giving a rousing pep talk to a little boy who spoke up about struggling at football. Joe shared his own experience of not being good enough when playing for the Torquay United football academy which led to his transition into rugby. His words inspired the young boy to tell the group and his family that he did not want to give up – a heart-warming moment for both the families and players, which resonated with the theme of resilience in Jack’s book and Gallagher’s campaign.

Jack Maunder, Exeter Chiefs Scrum-half, commented: “Gallagher’s campaign provided us with a platform to talk about resilience with some of the most resilient families in the country. Reading my book to those at Children’s Hospice South West was a humbling experience and it was incredibly moving to hear that, after the session, parents heard their children say that they weren’t going to give up, they are going to keep trying - embracing the power of hope. The ‘Tackling Tomorrow Together’ initiative has allowed us to make a difference during these tough times.”

The video showing the best bits from the surprise can be viewed and downloaded (here).

Whilst COVID-19 has been hard for everyone, the past year for the families and children at Children’s Hospice South West has been particularly challenging as the charity cares for children with life-limiting conditions. Providing invaluable support for local families across the South West region, the charity’s three hospices – in Devon, Cornwall and Somerset – have remained open during the pandemic for end-of-life and emergency care but, due to lockdown restrictions, the charity had to also quickly adapt by introducing at-home and virtual visits.

Amanda Gallagher [no relation], Children’s Hospice South West Corporate Partnerships Fundraiser, said: “The support Gallagher has given us throughout the pandemic has been second to none and this was topped off by the storytelling session. We have had to be particularly resilient during this past year and the book reading played on that theme whilst really inspiring the children, and giving them the chance to meet their local rugby heroes. Thanks to Gallagher’s support, we are hoping that the increased exposure through our pairing with the rugby clubs will help us in our fundraising efforts.”

Ardent Chiefs’ fan and head of Gallagher’s 50-strong team in Exeter, Geoff Gale, commented: “As a local insurance broker, Gallagher is doing everything possible to support UK businesses and charities during these trying times. Our work with Children’s Hospice South West is an example of how we are helping organisations stay operational, by providing specialist risk management advice on how to adapt their business model so they can continue to care for families across the region. But it’s the charity’s own resilience, determination and firmness of purpose that has delivered all the difference.”

As one of the businesses selected to benefit from the ‘Tackling Tomorrow Together’initiative, Children’s Hospice South West will be promoted on a match day at Exeter Chiefs and Bath Rugby (when COVID-19 allows), through in-stadia and programme advertising. Children and their families will also have the chance to attend a game to support Jack, Joe and Tom from the stands.

In addition to the rugby-related package, Gallagher will continue to offer specialist business advice and support to the hospice’s fundraising efforts during this period of uncertainty. The Exeter players and Children’s Hospice South West also took part in an exclusive business club event hosted by Gallagher ambassador and former England International, Ugo Monye. The business club featured over 50 South West businesses and helped to promote and celebrate Children’s Hospice South West’s 30th anniversary.

The full list of businesses involved in Gallagher’s Tackling Tomorrow. Togetherinitiative include: