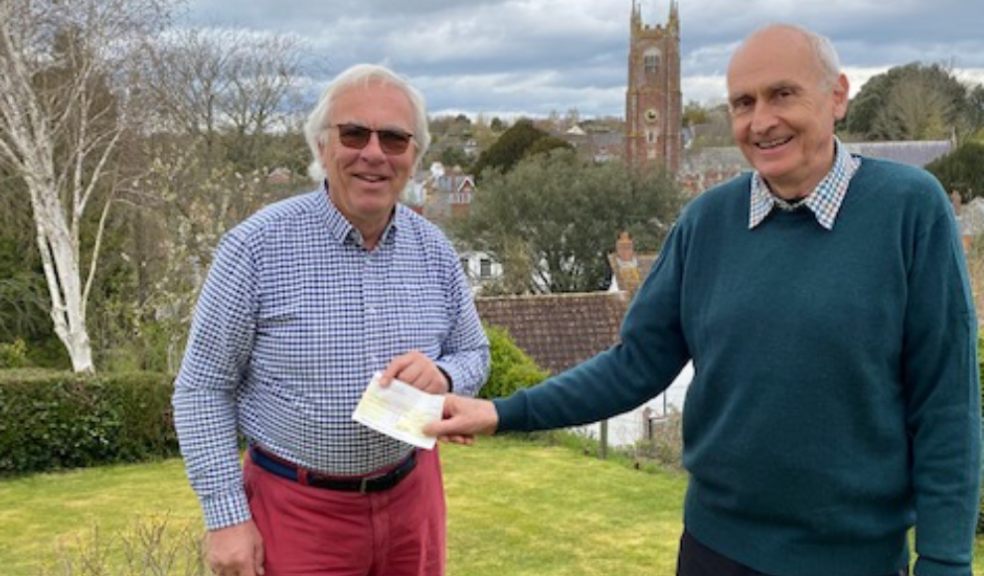 Lopes Masonic Lodge based in Exeter were delighted when their application to the WAKE fund on behalf of Kenton Force was successful.

Kenton Force led by Peter White and his team raise between £8 and £12 Thousand a year for FORCE EXETER the well known and worthy cancer support charity. They do this with the support of a Parish population of 1,300 people by hard work and determination organising in Non Covid19 times, Big Breakfasts, Sponsored Walks, 24hr dog walks, Cream Teas and Fares and also with the traditional collecting bucket most of which have had to be cancelled this year.

Peter White can be seen holding one of those hard working buckets together with David Guthrie Treasurer of Lopes Masonic Lodge who is also the voluntary treasurer for Force Kenton.

Every Spring and Autumn Freemasons from around Devon meet to give support totalling in excess of £45,000 to local charities & organisations throughout the county who are in need of assistance, this year Kenton Force was one of those selected.

The money is raised by the “WAKE Fund” a trust conceived by the Right Worshipful Brother William Alexander Kneel, the head of the Devon Freemasons from 1970 to 1984, the late owner of Kneels laundry & dry cleaners (now Johnsons). This fund now stands at £1.9 million and the interest earned is given annually to local non masonic organisations who are in need of help. Since the first disbursement in 2001 nearly £700,000 has been given to over 740 local worthy causes selected by members of the 133 Masonic lodges based in the county.

Well done Kenton Force, thank you WAKE FUND- the members of Lopes Lodge are grateful to be able support good people raising money for such a worthy and necessary cause.