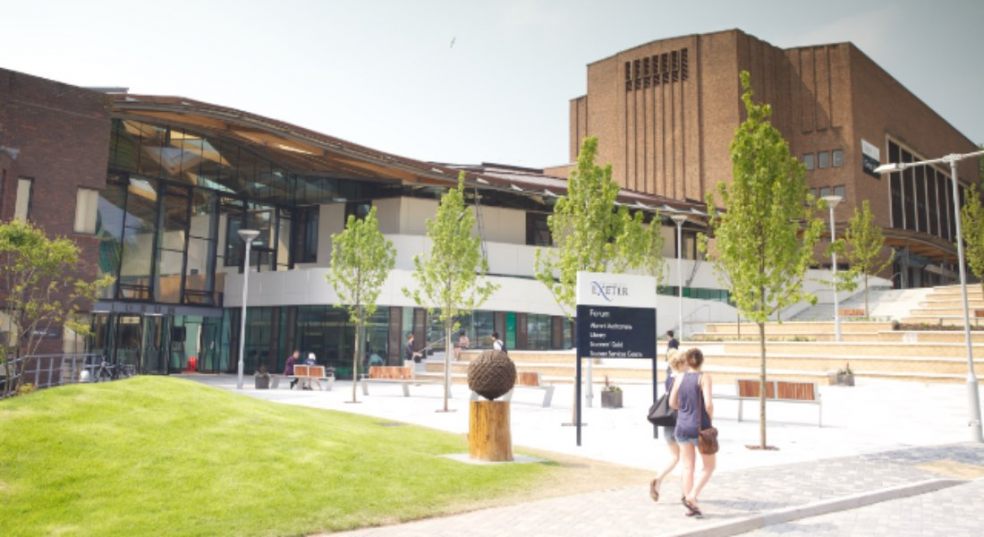 The University of Exeter has signed a landmark Civic University Agreement with city partners – the first in the South-West – to improve opportunity, prosperity, wellbeing and the environment for local communities.

Following local consultations, Exeter City Council, the Royal Devon and Exeter NHS Foundation Trust, Exeter College and the University of Exeter have set out their joint mission to drive progress in five areas:

The University of Exeter is in the top 15 universities in the UK and top 150 in the world, and recently launched a new ten year strategy setting out how it will use the power of its education, research and partnerships to address the major challenges of our time – climate change, healthcare provision and social justice.

The University is home to the UK’s 5 most influential climate scientists, and Exeter houses more of the world’s top 100 climate scientists than anywhere else in the world*. Exeter is also home to over 1000 researchers in environment, data science and computing; it leads the way in areas such as dementia, diabetes and the impact of the environment on human health; and is known for outstanding arts, humanities and social science expertise that enhances lives and knowledge around the world.

The Exeter Civic University Agreement establishes how the University will work with city partners to deliver shared goals on community priorities. For example, to address climate change the partners will establish a Net Zero Innovation Hub, supporting organisations to become more sustainable with new research and development facilities alongside access to specialist expertise. It will provide training and skills that enable digital transformation and support a greener, healthier way of life so that Exeter and the wider South-West lead the world in the transition to net zero.

On skills and education, the new alliance will create an exemplar education ecosystem that supports lifelong learning, continuous professional development and adaptation to the jobs of the future. The partners will also address the significant gap between disadvantaged and non-disadvantaged students achieving GCSE grades 9-4 in both English and Maths as well as access to higher education which remains low compared to other parts of the UK. The University has unique expertise on social mobility and through programmes such as ‘Train to Succeed’ with Exeter City Community Trust supports its students to teach functional Maths and English to the wider community.

Tackling health inequalities will also be a core mission as within Exeter there is a gap of 16.8 years between the areas with the longest and the shortest life expectancy. The University will provide expertise through a new Exeter Healthy Living Panel to co-develop solutions as well as continue to attract the world’s most talented clinicians and healthcare workers, training and retaining local talent to develop their careers in Exeter and the South-West.

On culture and tourism, the partners will develop a new Creative Arc for the City bringing together the University, the City Council and the Royal Albert Memorial Museum to build on Exeter’s profile as a UNESCO City of Literature and green city to support the local economy, social change and establish a global reputation as one the best cities in the world to live.

The Exeter Civic University Agreement is the first to be signed in the region but the University of Exeter is also working with partners across Devon and Cornwall to sign agreements with both counties. During local consultations and a survey with 1,000 residents over 70% said the University of Exeter is a great asset to the city with top benefits considered to be improving the economy, skills and jobs but many did not know about the wider research and innovation strengths and wanted to see more benefits and support for the whole community. A recent report by Frontier Economics found that universities in the South West of England are critical to their communities and currently contribute £9.2 billion to the economy and support 85,000 jobs.

The University of Exeter Vice-Chancellor, Professor Lisa Roberts who started in the role in September 2020 said on signing of the Exeter Civic University Agreement:

“I am proud of the leadership role the University of Exeter has in the city and region contributing to the economy, education, healthcare, culture and sustainable living. In the decade ahead though we need to deepen and strengthen our partnerships as we face up to the biggest societal challenges since the Second World War. I want us to better utilise our outstanding education, research and global connections to tackle inequalities and improve lifelong opportunities in Exeter and the wider region.

“For example, the South-west is perfectly placed to lead the charge on a net zero economy and secure investment for the skills and jobs to deliver a green industrial revolution. We have all the ingredients to shape a better way of life and I want Exeter to be a beacon around the world for the greener, healthier and fairer future we all want to see. Partnership is in our DNA and will be at the heart of everything we do in the years ahead to deliver progress for all.”

“I want us to work in partnership in the city so that we provide good, skilled jobs for everyone in Exeter. It is already a fantastic place to live but in the decade ahead we have a chance to make Exeter one of the best places in the world to learn, work and enjoy life through activities like sport, culture and access to green spaces.

“After COVID-19, prioritising health and wellbeing has never been more important. I want the Civic University Agreement and our partnership to be the cornerstone of creating a happier, healthier and more sustainable way of life for everyone in our community.”

“I am proud of the education system we are building in Exeter that is interconnected, innovative and supports people with the skills they need throughout life. I want the city to be a beacon around the world for education excellence, community co-operation and a place that enables people of all ages and backgrounds to thrive in a sustainable economy.”