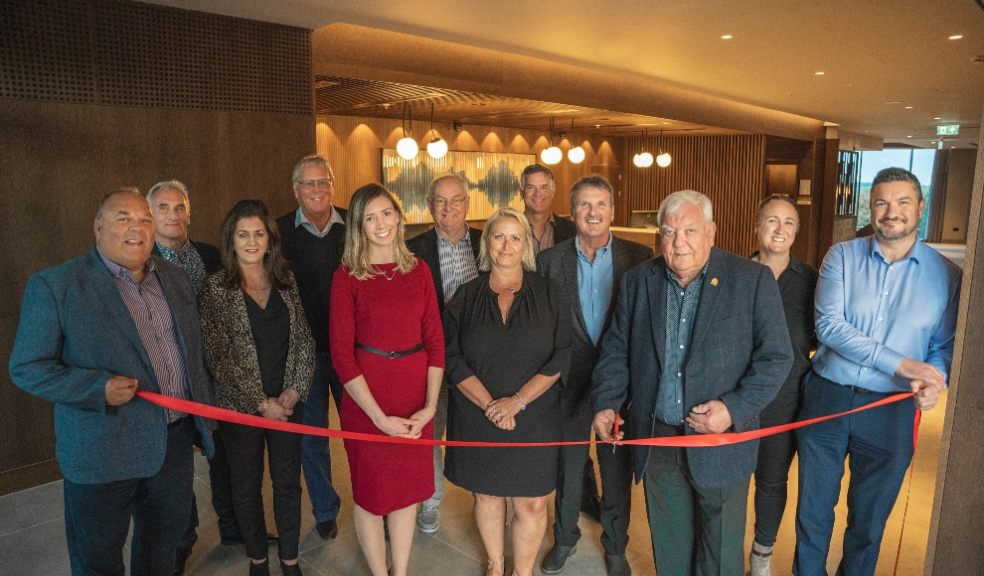 This week marked a landmark moment for our organisation, as the doors to the Courtyard Exeter Sandy Park Hotel opened to the public.

Tony Rowe OBE, Chairman & Chief Executive of Exeter Rugby Club was joined by the wider board of directors for the grand unveiling, celebrating a new chapter in the history of the business.

The spectacular, £40 million development is the latest feature in the expansion of the Sandy Park site, following on from the re-developed East Stand at the beginning of the year, and marks a significant investment in the future of the wider business.

The hotel forms a striking landmark as you approach the city, sitting astride the M5 only a stone’s throw from the stadium, offering fans and businesses alike an all-encompassing experience at Sandy Park.

The jewel in the crown is the magnificent ‘View’ Restaurant and cocktail bar, due to open soon, situated on the top floor of the hotel and offering 360-degree views across the Exe estuary and over the rolling hills of the beautiful South Devon countryside.

With 250 rooms, a fitness centre and even a specialist match-day bar, the Courtyard Exeter Sandy Park will be run by the Marriot Group, bringing their experience and expertise, ensuring that guests are treated to the very best hospitality at a truly world-class standard.

Sandy Park features as one of the finest events and conferencing facilities in the region, and with the addition of the hotel, will now appeal to clients from further afield as well as those looking to host multi-day events.  However, the four-star hotel is not only an asset to Exeter Rugby Club, but also to the local area which has been crying out for some time to have a hotel of this kind serving the region.

It is a testament to the hard-work of everyone involved in the project that it has been completed despite all the challenges presented by the pandemic, but this is never a club looking to rest on its laurels, and with plans in place for the development of the South End of the Stadium, Sandy Park continues to blaze a trail as one of the finest facilities in the country.

For more information about Sandy Park or any of the events please contact 01392 427427 or email events@sandypark.co.uk