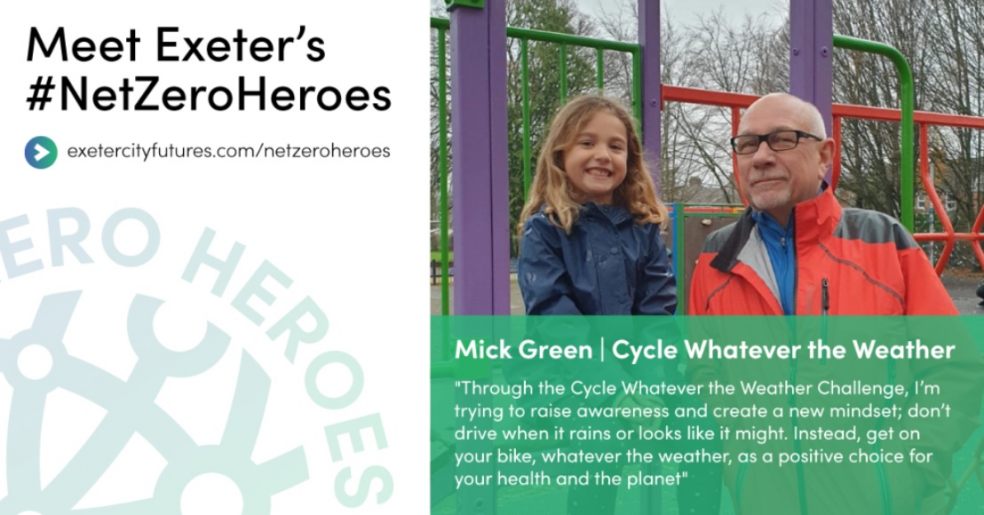 Exeter City Futures has launched a brand new initiative, called Net Zero Heroes which aims to celebrate local individuals, families and groups of people who are taking action on the climate and helping to deliver the city’s Net Zero Exeter 2030 Plan. Net Zero Heroes has been launched for #EarthDay – a global awareness campaign to drive positive action for the planet.

Throughout the pandemic, residents, families and workers have come together as a community, changing their habits, buying local, pooling resources and supporting the more vulnerable members of the community.

Exeter City Futures has been inspired by these individual actions and wants to recognise and celebrate local individuals and change makers who are doing their bit to help deliver the Net Zero Exeter 2030 Plan and who are inspiring others to join the net zero journey. So #NetZeroHeroes was born.

Exeter City Futures is now calling on local people to nominate themselves or other Net Zero Heroes by sharing inspirational stories and projects that are helping Exeter achieve its ambition to be net zero by 2030.

A diverse mix of Net Zero Heroes have already been nominated, including:

If you, or someone you know, is taking action to protect or enhance our local environment, offering vital services to the community or helping to change behaviours locally, you can nominate via the Net Zero Heroes webpage: exetercityfutures.com/netzeroheroes

Everyone has an integral role to play if the city of Exeter is going to become carbon neutral by 2030, and this initiative aims to recognise those who are already doing their bit and inspiring others to do the same.

People from Exeter are being encouraged to share this initiative with their friends and family, and to share on social media using the #NetZeroHeroes and#NetZeroExeter hashtags.