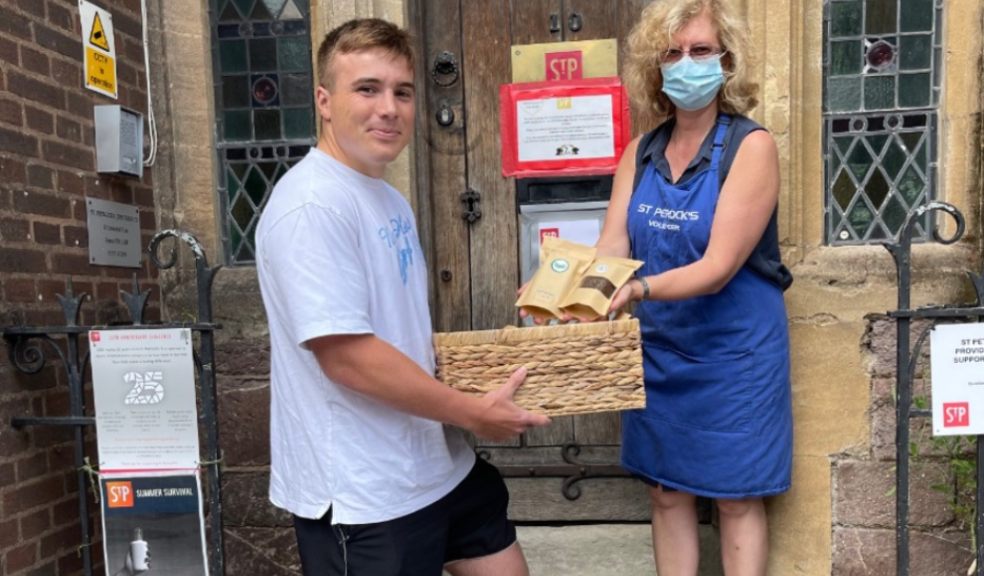 An Economics student is juggling his studies with plans to tackle world hunger by developing a ‘nutritionally complete’ food bar, which has already proved a hit with Exeter’s homelessness charities.

James Frost, a third year student at the University of Exeter Business School, was inspired to create the Phoenix Bar after noticing on Facebook that a friend had pledged to eat the same food for a week as Syrian refugees arriving in the UK.

“From the images posted and my understanding of nutrition I could see that the food wasn’t nutritious at all,” James said.

“So I did some investigating into what food was provided to those experiencing food insecurity, whether due to disaster relief or any other reason, and found that in almost all instances the food provided was actually very lacking in nutrients and there was no specific product provided.”

James had the idea of creating a fully nourishing food bar, made out of sustainable vegan ingredients and containing an optimum balance of calories as well as all the multiple micronutrients stated by the World Health Organisation (WHO) as required for complete nourishment.

He began experimenting in his kitchen at home to find an ingredient formula that would fully satisfy the criteria, and after arriving at the recipe for the Phoenix Bar set about supplying them to charities and organisations in Exeter that support people who are homeless or vulnerably housed.

“They were able to distribute them to their clients and get feedback, which was overwhelmingly positive, and some even expressed interest in purchasing Phoenix Bars in the future once they become available to buy,” he said.

Lucy Patrick, External Communications Manager at St Petrock’s, said: “We are very grateful to James for having donated a quantity of his nutritional bars to us. Our clients who are rough-sleeping are often malnourished and these snacks give them instant energy and other nutritional elements.”

James’ ultimate goal with the Phoenix Bar is to address the global problem of food insecurity, given that one in three people worldwide does not have access to enough nutritious food to lead healthy and active lives – a situation made worse by climate change.

And it’s not just the nutritional content of the food bars that will help his product to achieve this.

“Other advantages are that it has a long shelf-life, it is compact so easy to transport, it will tolerate high temperatures and it has durable packaging so will be suitable for air drops from high altitudes,” James said.

He also wants local farmers and food producers to be able to make the bars themselves by switching the core ingredients for locally sourced alternatives – a move that would reduce the Phoenix Bar’s carbon footprint as well as help local economies in developing and less developed regions.

Despite not yet completing his undergraduate studies, James has already been in discussions with humanitarian aid agencies such as UNICEF and the World Food Program about the Phoenix Bar.

They envisage making the Phoenix Bar suitable for consumption by infants by grinding it down into a powder that is then mixed with boiling water to create a porridge-like substance.

James’s vision for the Phoenix Bar depends on securing funding for the research that will take it to the next stage and allow it to be mass produced.

“The next stage of research and development will include ingredient sourcing as well as sourcing a manufacturer as well, because obviously at the moment the way I'm doing it, making these bars in my kitchen at home, is not something I can sustain,” James said.

“So I’m looking for funding to undertake scientific research and development with at least one food science and technology company, which will do a couple of things such as drive down the cost of ingredients, extend the shelf life and ensure the products survive in the hottest climates.”

James is also working towards ESG (environment, social, governance) credentials for Flaming Phoenix, his fledgling company, and plans to use a portion of funds raised to attain B Corporation certification, a third-party standard requiring companies to meet social sustainability and environmental performance standards.

Despite the all-encompassing nature of managing his own social impact business, James says it has not interfered with his studies.

“My degree has given me a really strong theoretical understanding of entrepreneurship so when I've encountered practical problems I’ve had the tools to be able to fix them, and of course I’ve been able to benefit from the life experiences of lecturers across the Business School, who are always very generous with their time.”

See here for the Phoenix Bar crowdfunding page and find out more at www.flaming-phoenix.co.uk.