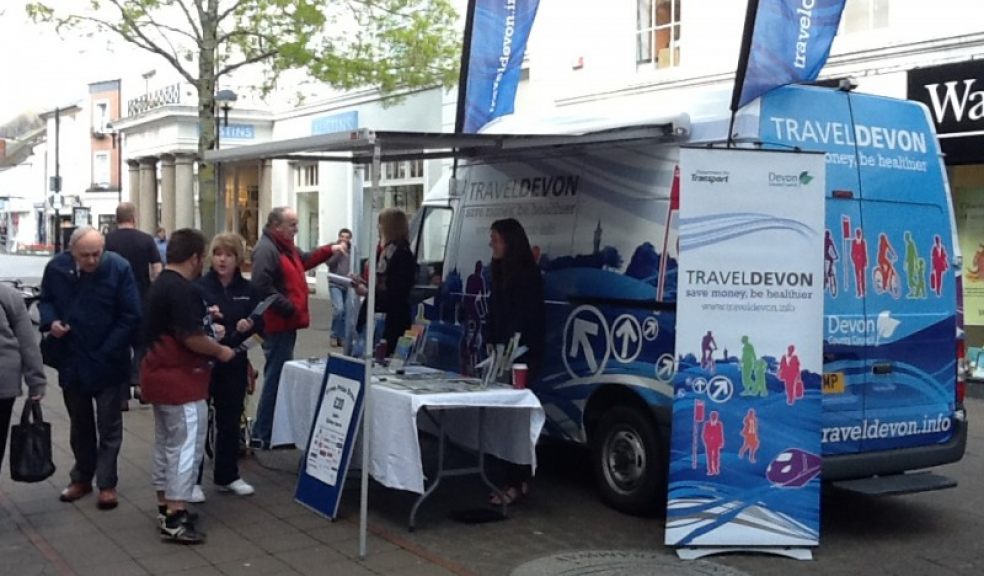 More than 3,000 people in Devon have so far been helped with advice and support from Travel Devon Roadshows.

More than 120 of the free roadshows, organised by Devon County Council, have been held in Exeter, Exmouth, Newton Abbot and Totnes in the past 15 months.

The Travel Devon roadshows are one of the projects developed through Devon County Council’s Local Sustainable Transport Fund which aims to support jobs and businesses by tackling congestion and promoting greater use of sustainable travel.

The free roadshows enable staff to speak to Travel Advisors about their daily commute. They are offered tailored journey planning advice to encourage them to walk, cycle, car share or travel on public transport, and free bus and rail “taster” tickets can be provided to enable staff to try alternative travel choices.

Chris Richards, Facilities Manager at the Met Office, said: “The Travel Devon Roadshow at the Met Office proved very valuable and has helped us reduce pressure on our car parks.  Staff found the personalised journey planning very beneficial and have taken advantage of the public transport taster tickets.”

The roadshows have also made an appearance at Totnes Show, the Dartmoor Classic at Newton Abbot, Exeter Guildhall, and at Haldon Forest.

So far more than 200 people have requested a free train or bus taster ticket, and more than 180 adults have asked to sign up for the free two hour cycle confidence sessions.

Among those to have benefited from the Travel Devon Roadshow by changing their travel habits are Francesca and Jeff Birch, from Dawlish, who both tried train taster tickets.

Previously, they were using a car every day to get to work.

Francesca said: “We met the Roadshow Travel Advisors when our employer, the Rural Payments Agency, relocated to the centre of Exeter from Clyst St. Mary. We used to drive to work everyday but didn’t want the challenge and expense of parking in the city. We used a free rail taster ticket to try the train journey from Dawlish to Exeter Central for a week and now travel by bus twice a week and commute by train for the remaining three days.”

Councillor Stuart Hughes, Devon County Council Cabinet Member for Highways said: “Through the roadshows, we are aiming to support and encourage people who would like to walk or cycle, car share or travel by bus or rail. By increasing the number of people who travel by these sustainable modes of transport we are looking to reduce congestion and carbon emissions, and support local economic growth.”

Local Sustainable Transport Fund projects focus on the key areas of Exeter, Exmouth, Newton Abbot and Kingsteignton, and Totnes and its surrounding area. These areas were selected as they are the fastest growing in Devon and are most susceptible to congestion problems.