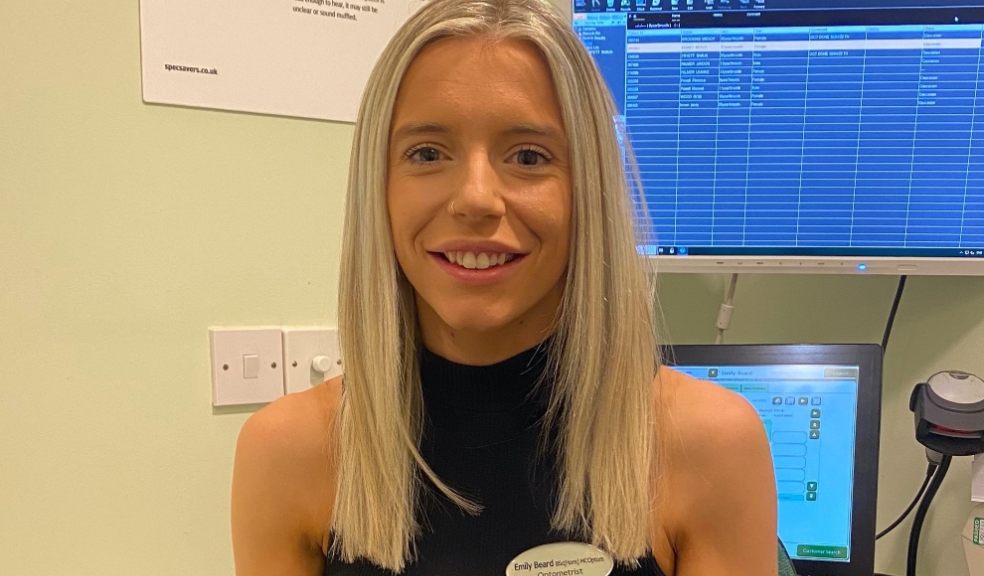 AN Exeter optometrist whose diagnosis saved a woman’s sight is raising awareness about the importance of eye tests.

Emily Beard, who works at the Specsavers Exeter store, assessed a 33-year-old woman whose sight was deteriorating.

As part of an extensive eye examination Emily used a hospital-grade optical coherence tomography (OCT) machine to look at the woman’s eyes and what she saw concerned her, so she urgently referred the woman to the Royal Devon and Exeter Hospital.

They immediately did an MRI scan and found a tumour pressing down on her optic nerves. The woman was transferred to Derriford Hospital in Plymouth, where she underwent a seven-and-a-half-hour operation to remove a tumour behind her eyes.

Emily says: ‘This is a prime example of the importance of eye tests. They’re not just about updating the prescription. An eye test can help detect all sorts of issues.

‘In this case, the woman came in complaining of patches of her vision going blurry. She’d been seen elsewhere but they didn’t seem to know the problem.

‘She was missing most of her field of vision in her eye, which suggested to me that something was pressing on her optic nerve, which is very serious, so I referred her to hospital straightaway.’

The woman, who does not want to be named, presented Emily with flowers and chocolates as a thank you.

She says: ‘I can’t express my appreciation to Emily enough for what she did for me. Her diagnosis was spot on and she saved my sight.

‘Without her I’d have carried on assuming my symptoms were just stress-related and I would have eventually gone blind. Emily is an absolutely amazing optometrist and I will always remember what she did for me.

‘After she referred me, it all happened so fast. It was such a delicate operation and Derriford didn’t know what my sight would be like afterwards. If I’d gone to Specsavers earlier it wouldn’t have been such a long operation.

‘So, of course, if I knew what I know now, I would have gone to Specsavers straightaway, because without their diagnosis I would’ve gone completely blind because the tumour was wrapped around the right optic nerve and was doing the same to the left.

‘I wanted to see my niece grow up – I was desperate for that – and thanks to Specsavers and the hospitals, I can do that.’

Specsavers recommends that everyone should have an eye test at least once every two years, and more often if they notice any changes to their vision or eyes.

Emily adds: ‘It’s great to hear that the operation all went well. It’s outcomes like this that made me want to be an optometrist, knowing what a difference a diagnosis can make to someone.

‘It also shows how important eye tests are, because if something serious is found people can get treatment early, and that can be crucial.

‘In this case, the woman wasn’t in any pain. Often people can go on thinking they’re fine when really they’re not, so they should get themselves checked out, because the technology we have now can pick up things that even the best optician might not see, and that can save your sight or even your life.’

To book an appointment at Specsavers Exeter, visit the store at 247-248 High St, telephone 01392 210604or go online at www.specsavers.co.uk/stores/exeter.