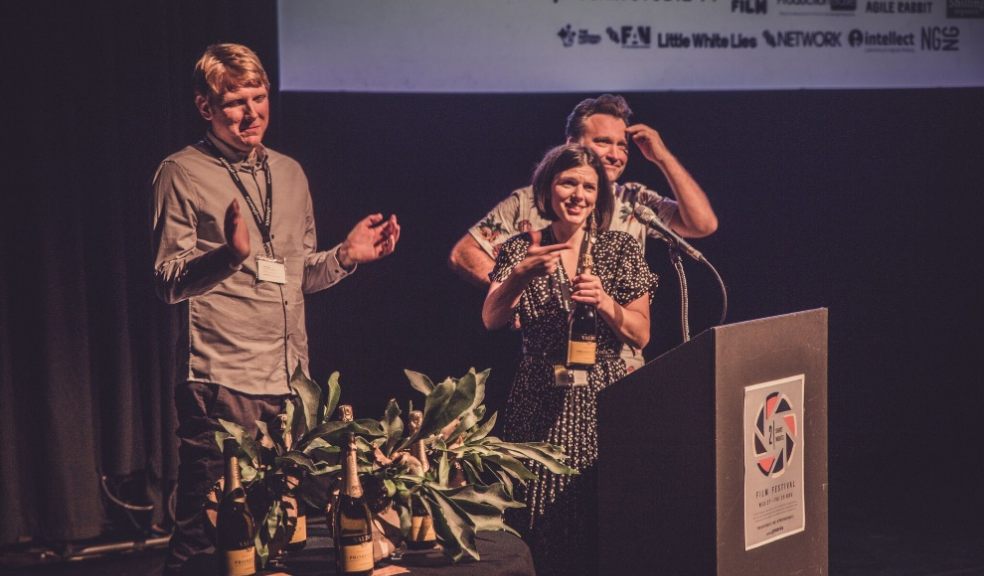 On Friday 29th November at Exeter Phoenix, Luke Hagan, Claire Horrocks and Jonas Hawkins of Two Short Nights Film Festival presented 5 prizes to a full house at a buzzing awards ceremony at the 18th edition of the short film festival.

Running over three days and spanning over 14 individual events the festival featured nearly 100 short films from 13 different countries. With a focus on South West talent almost 50% of the films features by created by a South West based filmmaker or were produced in the region.

Before presenting the individual awards, the festival team celebrated the creative talent within the South West and praised the hard work of this year’s Exeter Phoenix commissioned filmmakers.

The Two Short Night’s Best Film Award was presented to Zoey Martinson for The Fisherman, a Ghanaian film about an ageing fisherman who goes out to sea and returns with a talking fish.

The Audience Choice Award, which is voted for by those who attended the festival, was won by Exeter Phoenix 2019 Short Film Commissioned film Shuttlecock, by Tommy Gillard.

The Two Short Nights 48 Hour Film Prize, awarded to teams who took part in the festival’s 48 Hour Film Challenge, was judged by Anna-Ruth Peel-Cusson and Matt Burrows of Exeter Phoenix. First Prize went to The Fast and Fabulous 48 Hour Party People for their entry Counsellors. Second place was awarded to Blackpants Productions for their film L’Europèan Et Sa Courage.  And third prize was dutifully collected by Sensory Wizards for Une Domestique Au Travail.

A special mention went to Regent Royalty for their excellent use of the brief in The Bonds Of Brotherhood.

The Best Film, Audience Choice and Best 48 Hour Film winners received a bespoke, hand made living award created by Hayley Maker of No Guts No Glory, Exeter and a goodie bag which included a plethora of prizes; software from Red Giant, Premium Membership for Production Base, Short Film Studies journal subscription from Intellect, A Little White Lies subscription, membership to Shooting People and a week’s worth of free equipment hire from Exeter Phoenix.

Also at the festival, Emma Grazette was awarded the Exeter Phoenix Documentary Commission for her film idea that will ignite conversations about the black history of Bath. The Live Pitch, which took place on Thursday afternoon of the festival and was judged by members of Exeter Phoenix and Alice Cabañas of BFI NETWORK South West. The commission is worth £1000 and the finished film will be screened at Two Short Nights 2020.

To close the festival, Luke Hagan launched the 2019 Exeter Phoenix commissions, offering regional filmmakers training support and a share of £6,000 to realise their ideas. Filmmakers and artists were invited to submit applications by 28 February 2020.

Thank you to everyone for attending the 18th edition of Two Short Nights Film Festival, we look forward to seeing you all again in 2020.