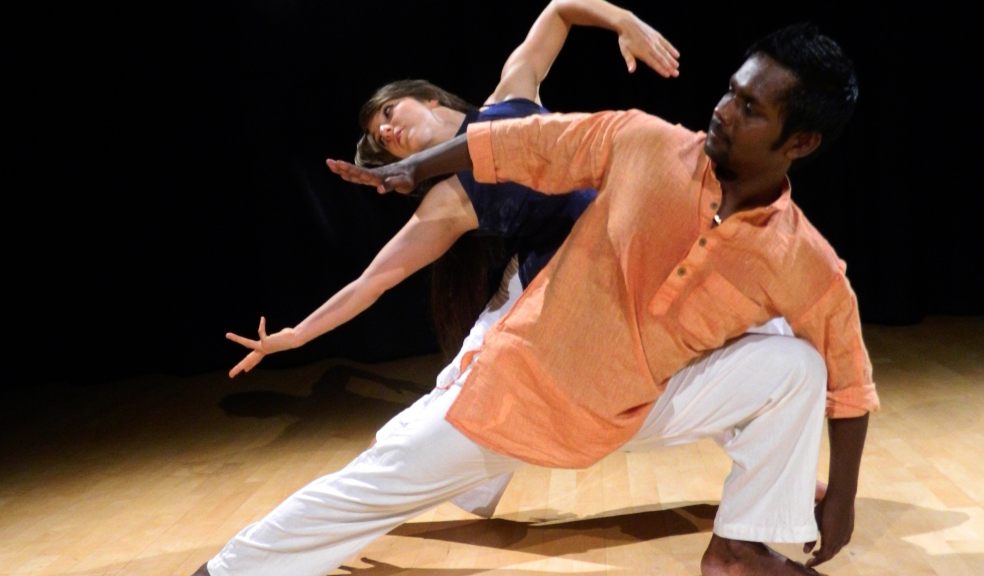 Dance is one of my greatest passions… ballet, street dance, ballroom, latin, tap, you name it I love it, I could watch it for hours and occasionally (when I think no one is watching) I'll take part myself, dancing around the house with my children. And yes I too am waiting in eager anticipation for the next season of Strictly Come Dancing to commence this evening.

However, it is live performance that sends chills down my spine. Most of my appreciation comes from the fact that I still regret giving up ballet at an early age and am in awe of anyone who has followed their dreams. I also have a love of poetry, inspired by my Grandmother, who sadly passed away when I was eight but who provides strong childhood memories. And so I was very excited to hear about Antara a new dance / performance poetry collaboration from locally based Interwoven Productions, which specialises in cross-artform performance with holistic themes.

Written by JoJo Spinks and Steve Duncan and Directed by Amanda Knott, Antara is an intercultural love poem featuring the exhilarating and powerful Indian dance of Ajeesh K Balakrishnan fresh from the world-renowned Attakkalari Centre for Movement Arts in Bangalore. The movement has been created by Ajeesh in collaboration with Exeter talent Kay Crook, who undertook a six month residency at Attakkalari where their journey together began.

In their solo performances Ajeesh offers a bold, tirelessly energetic and touching portrayal of a young man who is trying to find peace having rejected an alien love because she is different. Kay is the celestial being shining bright as a star on stage, almost out of reach but dazzling in her fluid movement using martial arts-inspired dance techniques and commanding the attention of the fully packed Exeter audience. However, the performance blazes all the more brighter when Ajeesh and Kay come together on stage, always ebbing and flowing in tune with each other, blowing in the wind, increasingly playful and passionate until Ajeesh loses faith in the relationship.

The voice - provided in the form of a powerful, fast-paced and almost hypnotic poem co-written and performed by Steve Duncan, award-winning performance poet and inspirational speaker - is that of a third generation Indian Brit and his journey to reconnect with his culture and regain his sparkling love. He talks of an elderly grandmother, frail in body but iron-like in her support of her family.

Having seen Steve perform live at the Antara launch party just prior to two weeks of intensive rehearsal time for Kay and Ajeesh, and knowing the power he can command over an audience, at first I was disappointed that he did not join the dancers and musician on stage during the performance. However, I quickly came to the conclusion that the right decision had been made to keep his part as that of a narrator. Steve's compassion shines through in his words and it was almost as if he had entranced the entire audience.

By providing only spoken word as a background rather than Steve's physical presence on stage, we hear not Steve Duncan, performance poet, but a young Indian British man struggling with life decisions and taking inspiration from the world around him.

However, those that stayed to the after-show question and answer session were indeed in for a rare treat, with Steve giving an impromptu and deeply moving poetry performance to make up for not having him perform live on stage.

The project has particularly benefited from the Artistic Direction of Amanda Knott, who trained at the Royal Ballet and performed with Ballet Rambert before becoming Artistic Director for professional touring company Creative Cow.

Amanda said: "Antara mixes rhythmic, world-music with urban, British poetry. The combination of these evocative sounds fires the choreographic imagination and superbly underscores the poignant story of a bewildered young man.  To balance the mix is my challenge and one I relish."

Jo Jo Spinks said on the night "We have been overwhelmed at the positive response. This project has generated nothing but goodwill and support from the beginning and those feelings emanated from the Exeter audience on the night. We feel uplifted and truly inspired now for the rest of the tour".

In a truly inter-cultural collaboration Antara celebrates diversity, bringing together influences from all over the globe to create a visually stunning performance that interweaves dance and poetry to powerful effect.

If you missed seeing Antara in Exeter, you still have three further opportunities to see the performance live before Ajeesh returns to Bangalore and possibly Kay too and Steve is lost back into his performance poetry, work within prisons and motivational speaking roles.