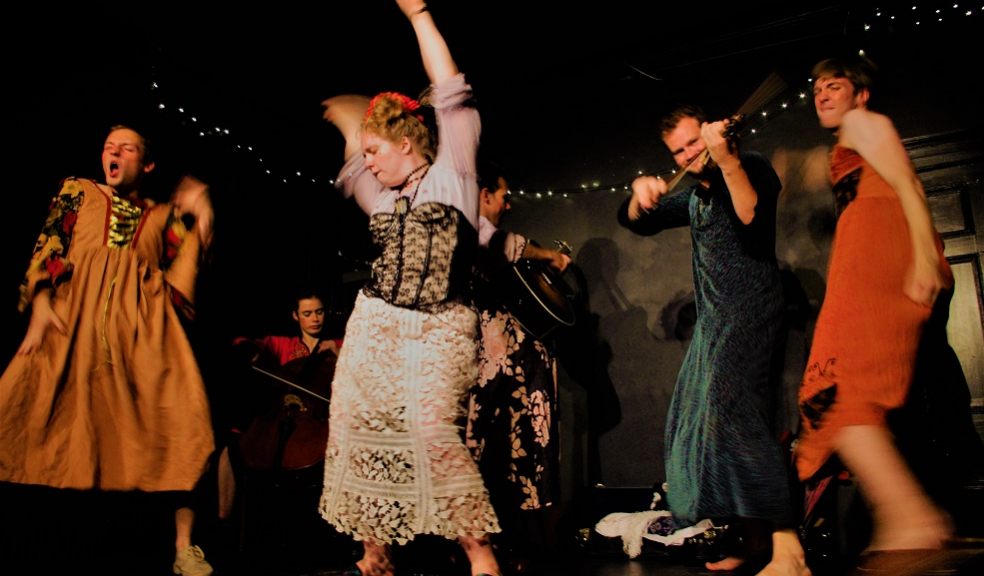 After rave reviews at the Edinburgh Fringe 2018 and sell-out shows in Bristol and Sheffield, Riddlestick Theatre bring their interactive musical comedy The Cabinet of Madame Fanny Du Thé to Exeter Phoenix for one night only on Sunday 28th April.

Their riotous show invites the audience to meet the eccentric 18th century explorer, Madame Fanny, and to take their pick from the weird and wonderful souvenirs in her cabinet of curiosities. For whichever curio they choose, Fanny and her servants perform the elaborate tale behind it, taking the audience on a voyage of hilarity. From battling with pirates to partying with Marie Antoinette, Fanny's (allegedly) done it all. But while she revels in telling her outrageously outlandish stories, somebody far more serious is on the way to bring her down to earth. The show is a celebration of curiosity and story-telling, features live original music, and allows the audience to hand-pick the tall tales they are told.

“Their energy is boundless, the script fiercely intelligent and the original live music bound to stay dancing through your head.” (The Guardian)

The show proved a hit with audiences at last year’s Edinburgh Festival Fringe, and was chosen as one of The Guardian's 'Best Shows at the Edinburgh Festival 2018'. Exeter will be the penultimate stop of their UK Spring Tour, which saw sell-out shows in Bristol and Sheffield, and critical acclaim for their run at Pleasance Theatre, London. This is Riddlestick Theatre’s second show. Their debut, The Dead of Night in the Middle of Nowhere, toured festivals and theatres during 2016-17. This will be Riddlestick’s first time performing in Exeter.

The Cabinet of Madame Fanny Du Thé is on at Exeter Phoenix: Voodoo Lounge (Bradninch Place, Gandy Street, Exeter, EX4 3LS) on Sunday 28th April at 19:30. Tickets cost £10 (£8 for concessions) and can be purchased at www.exeterphoenix.org.uk or by calling 01392 667080. Suitable for ages 12+. More information about Riddlestick Theatre can be found at www.riddlestick.co.uk.