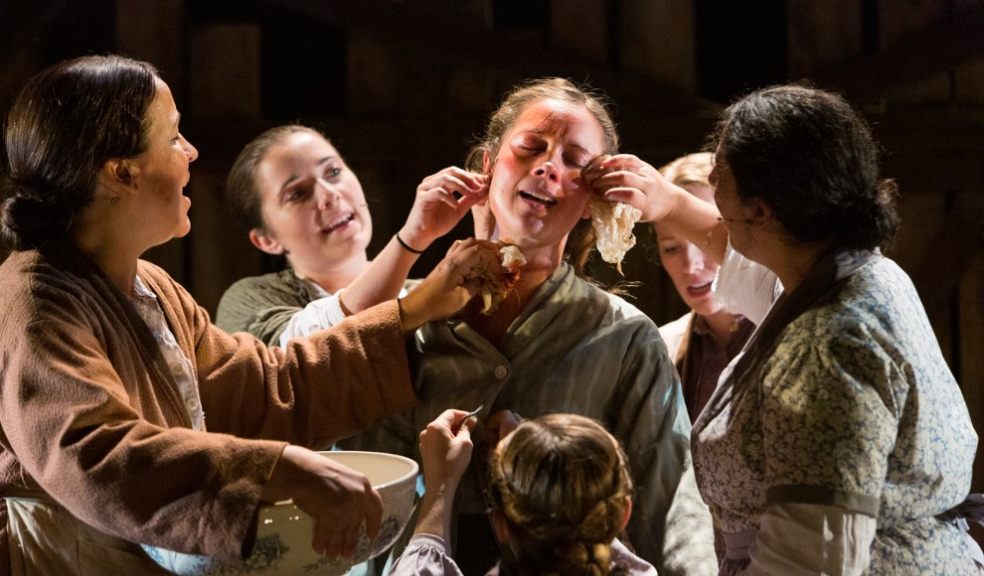 The critically-acclaimed production The Ballad of Maria Marten returns to stages across the UK this spring 2022 and comes to Exeter Northcott from 8th – 12th March.

A thrilling retelling of a real-life murder mystery, critically-acclaimed production The Ballad of Maria Marten returns to stages across the UK this spring 2022. Produced by Eastern Angles and Matthew Linley Creative Projects, Beth Flintoff’s captivating drama turns history into her-story through the exploration of love, loss, trauma, and patriarchal power.

This timely production highlights the dangers lurking behind closed doors, as the country emerges from the pandemic with domestic abuse rates higher than ever before. Flintoff covers these themes with expressive sensitivity – she is an exciting writer previously longlisted for the Bruntwood Prize and the winner of a 2021 MGCfutures Bursary for theatre-makers of the future.

It is summer 1827 and in a red barn Maria Marten awaits her lover. One year later, her body is found underneath the flooring in a grain sack, and the manhunt begins. Focusing on Maria’s life rather than her death, this acclaimed adaptation by Beth Flintoff (co-director, The Incident Room, New Diorama; writer, The Rivals, The Watermill Theatre) brings Maria’s own perspective to the forefront of the infamous ‘Red Barn Murder’.

Originally commissioned by Eastern Angles, writer Beth Flintoff was inspired by her work with survivors of psychological abuse. The Ballad of Maria Marten is a clarion call for an equal and safe society. The story hopes to showcase the power and joy that can be found in female camaraderie.

Beth Flintoff comments, Eleven women died at the hands of their partners during the first three weeks of lockdown. It’s never been more important for us to consider and celebrate the lives of those that society does not manage to protect. This is an old story, about the infamous murder of a woman, but now the story is told from her point of view. I wanted to focus on who Maria was: who she loved, what she laughed about, and what she does when she's having fun. I didn’twant her to be a victim anymore, so there is no violence onstage.

Director Hal Chambers adds, At the beginning of The Ballad of Maria Marten writer Beth Flintoff's stage direction tells us that Maria's best friends ‘unmurder’ her and that is exactly what we are trying to do with this production. Nearly 200 years on, we hope to let Maria and her friends finally have a voice - and what emerges, especially post-lockdown, is a play for our times. Told in vivid movement, searing music and a swirl of passion, The Ballad of Maria Marten stars a dazzling all-female ensemble.

Flames lick at the stories that history has held on to, as instead of bloodied corpses, we get to see full-bodied women – vibrant and complex – with their lives of infinitely more value than their deaths (★★★★, The Guardian)

To book tickets for the Exeter shows click: https://www.exeternorthcott.co.uk/events/the-ballad-of-maria- marten/