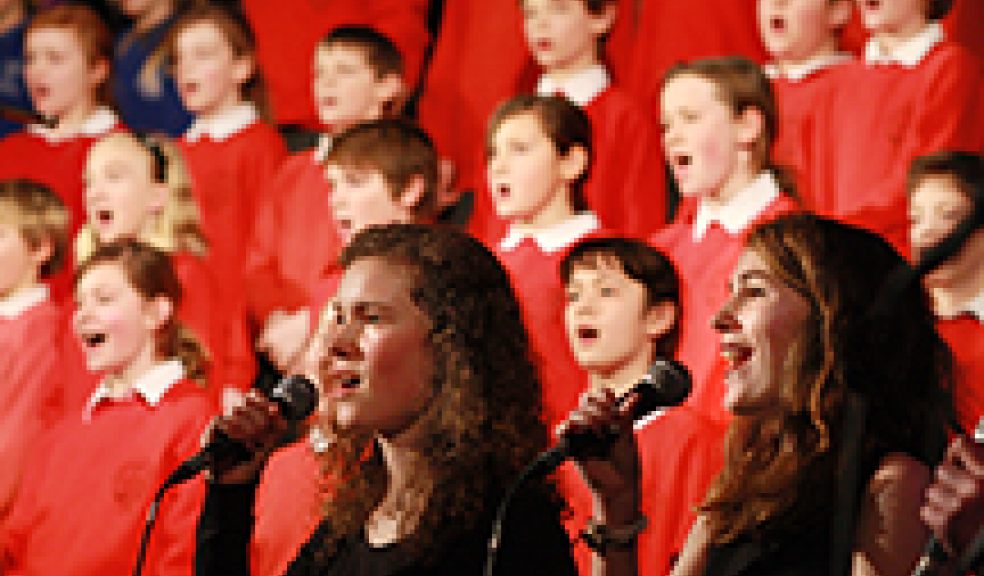 There was barely a dry eye in the house as the young voices of the B Sharp Vocal Collective rang out and raised the rafters of Exeter Cathedral last week.

The Beer Quarry Caves Concert was the culmination of a year of musical discovery that has seen children and young people from across the region working with music professionals to produce new music and songs inspired by the Beer Quarry Caves.

The B Sharp Vocal Collective filled the second half of the concert last Tuesday and followed a selection of stories, film, songs and poems organised by Woodroffe School that related to the historic caves at Beer where stone has been quarried for 2000 years and has been used to build Exeter and St Paul’s cathedrals, parts of Westminster Abbey, the Tower of London and Windsor Castle.

Under the direction of composer John K Miles, the B Sharp Vocal Collective, made up of young singers from St Michael’s and Mrs Ethelston’s primary school in Lyme Regis, St Mary’s in Bridport and Woodroffe School, along with a core group of soloists, were in stunning form, delivering formidable performances that brought a lump to the throats of parents and teachers alike.

Not only was the singing incomparably powerful, the fact that all the ideas, lyrics and melodies came from the young people themselves is a lasting testament to their creativity, ambition and talent.

Around 160 children and young people followed by their parents, invited guests and members of the public arrived in 13 free coaches laid on from rural locations all over West Dorset and East Devon and as an audience of more than 500 looked on, the concert provide a fitting finale to the project, yet another wonderful B Sharp music project that has engaged and enhanced the lives of young people throughout the region.

“It’s not every day that so many children and young people from all backgrounds in the rural hinterlands of the south west get an opportunity to work together on such a large scale project with professional musicians at to perform in such a prestigious venue,” says B Sharp director Fran Williams.

“Singing didn’t always grab the young people at first, but once the project was underway everyone was fully signed up to it and nothing was going to dampen the spirit and commitment.

“They will remember this experience forever, it is a remarkable achievement by everyone concerned and the feedback we have collated consistently demonstrates the value and high levels of understanding and appreciation that the experience has meant to them.”

Flora Jamieson, whose daughter Nelly goes to St Mary’s Bridport, praised everyone who took part – not only in the final concert in Exeter, but also at previous shows in Bridport and Lyme Regis.

“From writing the songs, rehearsing and meeting children from other schools, to performing in three great venues, Nelly has grown in confidence and learnt new skills that would not otherwise have been available to her,” she says.
Composer/music leader John K Miles was equally impressed.

“Awesome, committed performances, it was a stunning culmination to another wonderful B Sharp project,” he said after the concert.

He went on to thank percussionist Adriano Adewale who had played in the first performance in September and Marshwood Primary School, which also took part, as well as the technical crew and the charity’s board for its fundraising and support.

B Sharp’s dynamic creative singing project, funded by Youth Music and West Dorset District Council, was designed to raise levels of aspiration in young people through group singing and solo singer Phoebe Hill is not the only one whose future ambitions have been boosted as a result.

“I have absorbed so much inspiration and motivation from B Sharp, which will give me the drive to realise my ambition and not give up,” she says. “My dream would to be involved in the music industry – producing, performing and making music which I know is a very competitive job, but I won’t let that put me off.”

B Sharp runs a varied programme of music, singing and young music leadership, with weekly music making groups where children and young people can explore and develop their music skills. It has a very clear inclusion policy and runs a bursary scheme so that nobody is excluded on grounds of hardship. For more information call 01297 444252 or email franwilliams@bsharp.uk.com.

* All photos by Maisie Hill, unless otherwise captioned.