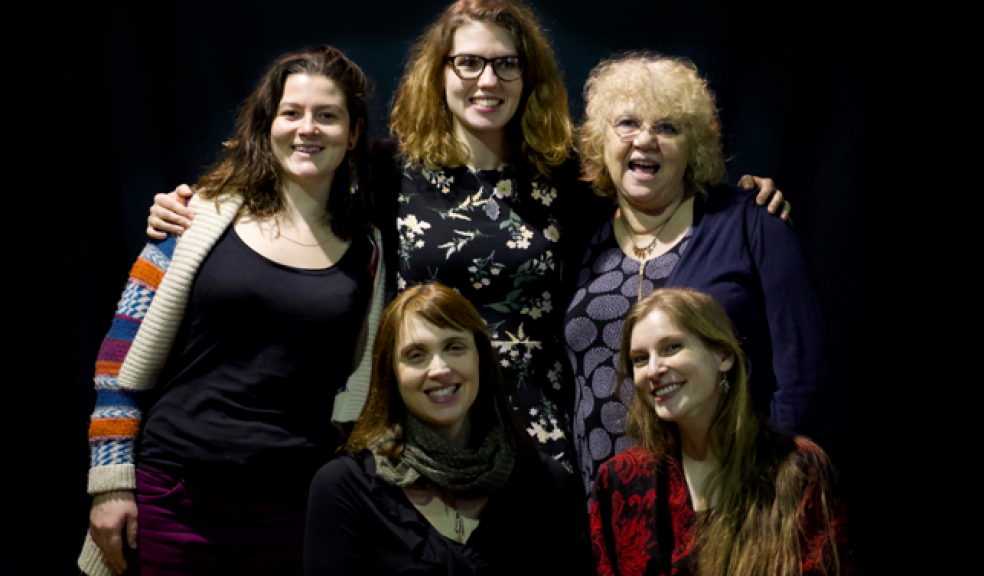 A new show is touring venues in Devon and Dorset to celebrate International Women’s Day 2018, after an appeal for women to join the choir led to 63 arriving for rehearsals!

‘Aint’ I A Woman’ is the third ‘Her Story’ show organised and written by Devon-based arts charity, Wren Music, and featuring women from across the South West. For some of the 63, this will be their first experience of singing on a stage.

The show is coming to the Cygnet Theatre in Exeter on Friday 9 March as part of a tour of four venues in the space of a week. It’s also visiting All Saints Church Hall, Okehampton (3 March), the Marine Theatre, Lyme Regis (8 March – International Women’s Day) and Plough Arts Centre, Torrington (10 March). Further event details are below.

There’s still a chance for women to take part in the project, with workshops from 2pm to 3.30pm on the Saturday afternoon of the performances in Okehampton and Torrington, when they can learn two of the songs to then perform with the choir in the evening.

As with the choir rehearsals, no experience in singing or reading music is needed – just come along: “The topics we’re singing about are so important, we want to share them as widely as possible, so any women are welcome to join our workshops,” said Amy Wilson, one of the professional singers at Wren Music and a co-writer of the show.

“Whether you have sung before or not, whether you feel confident or not, you will receive a warm welcome.”

‘Ain’t I A Woman’ refers to the inspirational speech by Sojourner Truth, an activist and freed slave in 19th century America. In Ohio in 1851, she gave an impromptu speech challenging the status quo of relations between north and south, rich and poor, black and white, and between men and women.

The show also celebrates other unsung heroes in the years since then – and it reflects today’s events, too. One song is called ‘Hashtag Me Too’, while another is based on experiences of women in refugee camps in France. Another of the songs is written by Wren Music’s Patron, the legendary folk singer-songwriter Peggy Seeger. ‘Carry Greenham Home’ is about the women’s camp at RAF Greenham Common in the 1980s.

“When we introduced this song at one of the choir rehearsals, Sarah, the musical director of the show, asked whether any of the women had been at the camp.  Five hands went up and we had a spontaneous round of applause,” said Amy.

But the show isn’t just about women, because it also highlights the role played by another group of unsung heroes – the men who give their support to the campaign for equality.

One song, ‘Kitty and John’, marks the centenary of the first women in Britain getting the vote in 1918.  Amy explained: “We’ve created this ballad by weaving together the stories of two suffragettes – Kitty Marion and Lillian Forrester. Kitty was subject to over 200 force feedings by prison doctors in 1914, and Lillian was involved in smashing the glass of paintings in the Manchester Gallery in 1913. Lillian’s husband was vocally in support of her actions, and so we wanted to use this opportunity to celebrate the men who take action and offer solidarity to women making change.”

The songs are written by professional women musicians at Wren Music, with contributions from those who attended the choir rehearsals during January and February. The song about women refugees is based on eye-witness accounts from a member of the choir: “Again, this song challenges assumptions in the same way Sojourner Truth did,” said Amy. “The song says: ‘They call us refugees, but we are women’.

“It’s been very exciting to explore the ideas behind the songs, and the women have enjoyed talking and singing about these themes, because there is a need for them to be discussed,” she added.

The show culminates with all the women singing the title song, especially written using extracts from the speech: “With all those voices, it will sound amazing,” said Amy. “It’s a tribute to a woman who was way ahead of her times.”

In the past three years, the Her Story project has created around 40 songs in a traditional folk style, all of them with positive stories about women. This year, Wren Music received funding from the National Lottery through Arts Council England so the show can go on a tour. In the previous two years, the ‘Her Story’ shows were one-off events that rapidly sold out.

Each performance of Ain’t I a Woman starts at 7.30pm and lasts 90 minutes. Tickets are £10 for the show, £12 for women wanting to participate in the afternoon workshops.  www.wrenmusic.co.uk