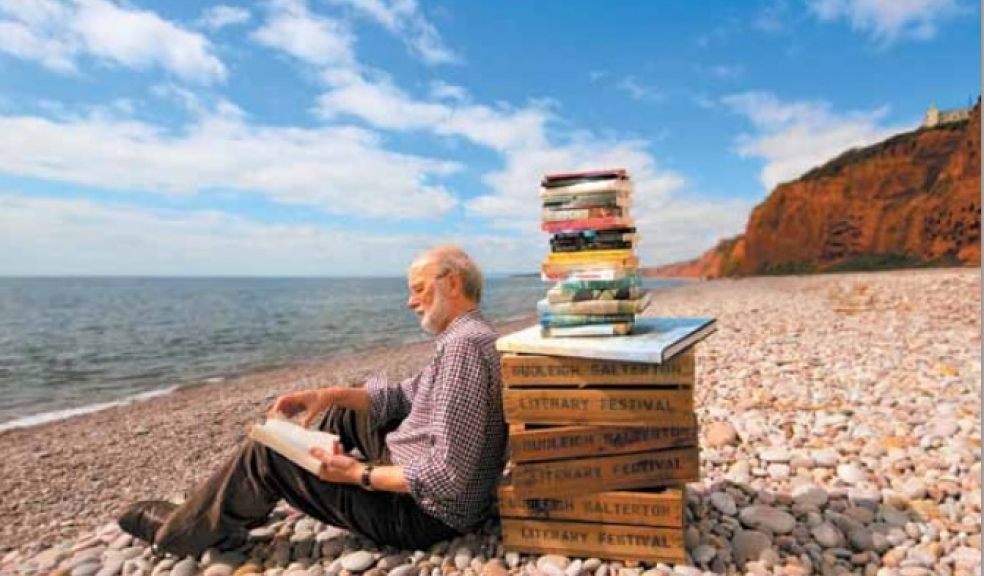 Running since 2008, the Budleigh Salterton Literary Festival is back for more from 19 – 22 September, boasting a dazzling line up of well-known authors and unique workshops.

Attracting audiences from as far afield as Australia, the Lit-Fest has been a growing success with tickets from as little as £7.50 – which can be booked in person or by phone from The Budleigh Salterton Tourist Information Centre (01395 445 275).

Hilary Mantel CBE, President of the Festival, and the first female author to win the Man Booker Prize twice, claims “Some (acts) will make us laugh, some will make us think and all will make us read... We want to see our audiences happy, attract the big names and continue to grow our great community festival. Here’s to another successful year of words by the sea.”

A Word from the Authors:

On Budleigh:
“I first came to Budleigh as a teenager, walking across the cliffs from Exmouth on a hot summer’s day, and saw below me what looked like the kind of landscape and seascape that you might see in a dream.”

On the Lit-Fest:
“It’s unusual for a small community to play host to such big names. That we do so is thanks to the ambitions of our founder, Susan Ward, who wanted the best for our audiences. We mean to continue her work by inviting writers who are the best in their field and who are making the news.”

On aspiring and emerging authors:
“I would say tenacity is almost as important as talent, so write your way through failure and the indifference of the publishing industry till you come out on the other side
“Don’t expect quick rewards. Take risks on the page. Don’t ask your best friend to read your work: unless she’s a publisher, of course.”

Hilary will be present at three events throughout the festival including her own event that will be chaired by Erica Wagner.This event will offer the opportunity to hear Hilary talk about her current work and will touch upon the writing and research of her much anticipated third book in the Thomas Cromwell trilogy.

Hilary will then be taking part in BBC Radio 4’s Bookclub event on Saturday 21st September.

Hilary will also be hosting an event with two prize-winning young authors Katie Ward and Ed Hogan. Katie Ward made a stunning authorial debut with her novel, Girl Reading and recently received the Clarissa Luard Award. She has said of the prize-winning Ed Hogan that “his powers of observation seem almost supernatural.”

On Budleigh Lit-Fest:
“I feel very privileged to be doing an event with Hilary Mantel, whose work I've admired for a long time, and with the brilliant Katie Ward. I'll be sticking around for lots of the other events, too. It's a great programme.”

On his influences:
“Other books and films! There are so many great works out there to enjoy, study, and eventually copy from!”

On Budleigh Lit-Fest:
“I have never visited Budleigh Salterton but have heard from many people that it is a delightful town and that the literary festival is well-organised and very popular.  I look forward very much to taking part.”

On Jane Austen’s influence:
“I have always been concerned that my novels should be well-structured and Jane Austen has been a very important example and influence in this regard.  Emma is probably the most cleverly constructed novel in the canon of English literature.”

On how her writing differs from Austen’s:
“Jane Austen is a genius and I don’t claim to be one. Jane Austen wrote in the late 18th and early 19th centuries.  The vocabulary and style are obviously somewhat different from mine, although we have much in common. Jane Austen is an example of the importance of setting in the novel and how writers should attempt to provide readers with a distinctive and believable world into which they can enter for entertainment, comfort and enjoyment.”

One of the nation’s best-loved crime writers, PD James will be doing a rare “In Conversation” discussing her long and successful career as a writer and her recent novel Death Comes to Pemberley, a follow on to Pride and Prejudice, published by Faber & Faber.

On Budleigh Lit-Fest:
“ I was attracted to the festival for a mixture of reasons. The place looks absolutely beautiful but I've never been, and I love being by the sea.

“I also have worked with Sarah- Jane the director of this festival at other festivals... and have known her well over the years, and find her always well organised.

“I like going to new places and seeing the relationship between a community and its readers.”

On her influences:
“The biggest influence on my writing is probably my reading. But also listening to music - particularly jazz and blues. All sorts of things can surprise you and feed back into your writing though. Cooking for instance is quite like writing in the way that you have to let ideas marinade and take shape. I love listening to the way that people talk wherever I am and that always feeds back into my writing. Places that I love often influence what I write. And random and strange events that I might happen to witness might have a direct influence on a story or a novel. When you write, you go about the place with your eyes and ears open, and whatever you see and hear can often find its odd and meandering way back onto your page.”

On her favourite bits of Exeter:
“Probably many people would say this, but  the cathedral.

“I've often read in Exeter, at the university for instance and have a great fondness for it, because I've been there a few times over the years.

“I think the first reading I did in Exeter was when my son was two and now he's about to be 25. It's the only way we I can properly measure time; through remembering what age Matthew was when…”

A gifted poet, novelist and short story writer, Kay was born in Edinburgh and brought up in Glasgow. Her recent memoir, Red Dust Road,  has been described as ‘a fantastic, probing and heart-warming read’ by the Independent, it’s packed with evocative and sudden twists as she traces and finds her Highlands mother and Nigerian father. Her latest collection of poems, Fiere, is a lyrical counterpart to her memoir.