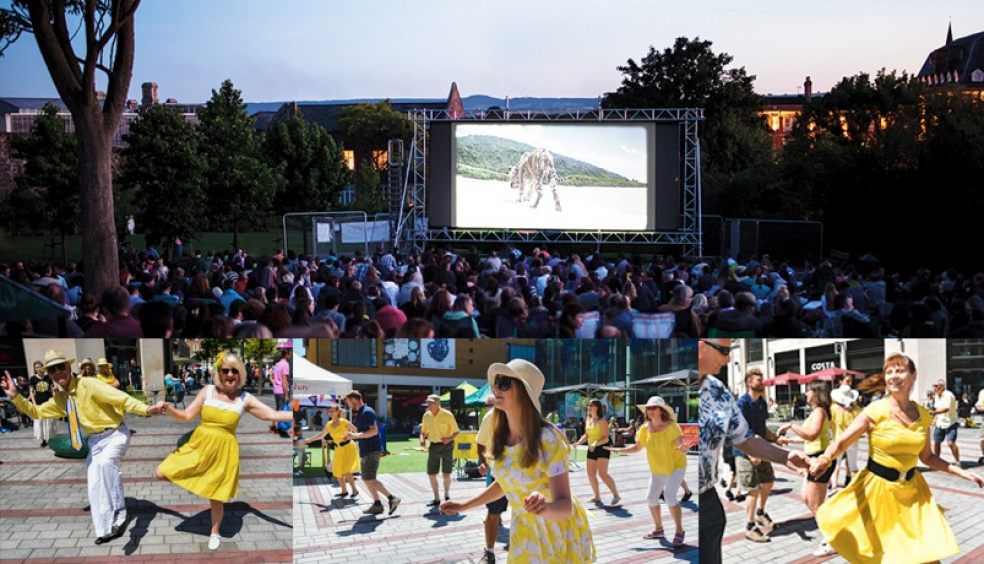 The official ticket launch for one of Exeter’s most anticipated summer events kicked off in Princesshay with a surprise flashmob of lindy hop dancers.

In fitting with one of this year’s film highlights, multiple Oscar-winning blockbuster La La Land, this dance celebration in the sunshine aptly marked Exeter Phoenix’s launch of Big Screen 2017 tickets going on sale. Crowds of Saturday shoppers gathered to watch as members of the South West Lindyhoppers dressed in yellow appeared from nowhere and strutted their stuff to the song ‘T'aint What You Do (It's The Way That Cha Do It)’ by Jimmie Lunceford. Some onlookers caught in the spirit of the moment joined in.

The popular outdoor cinema event Big Screen In The Park takes place this year at Northernhay Gardens between the 7th and 13th of August. With growing success of the event, which sold out multiple screenings in 2015 and 2016, al fresco film fans to this year’s event can enjoy a special expanded Big Screen featuring seven films, more than ever have been screened before. The film line up will treat locals and holidaymakers to cult classics, family favourites and new releases over seven summer evenings. A unique opportunity to experience the magic of the movies on a huge 10m screen, with the illuminated Cathedral city as a stunning backdrop.

Guaranteeing something for everyone, the recently announced line-up includes the much celebrated La La Land featuring Ryan Gosling and Emma Stone, 60s Hitchcock classic Psycho as well as cult masterpiece Donnie Darko. Recent blockbuster space adventure Rogue One: A Star Wars Story promises to be a spectacular addition to the programme, viewed beneath a looming night sky. Also on the list is one for all the family, a special screening of Monsters, Inc., Hunt For The Wilderpeople, which made nearly every ‘best of 2016’ list going, and the British flick that shot Hugh Grant to fame, Four Weddings And A Funeral.

Adding to the festival feel, there will be an excellent selection of food and drink including wares from Flaming Good Pizza, Candyfloss Kids and Chococo, a fully stocked bar and the original and best Bikecaffe.

Tickets on sale now from bigscreeninthepark.com or by calling Exeter Phoenix’s box office on 01392 667080.

Four Weddings and A Funeral (15), Mon 7 Aug
Mike Newell, UK, 113 mins, 1994
This is the best of British – a simple and ingenious story of a loveable, floppy haired Englishman and his friends navigating the awfulness of marriage… only to admit that it’s all rather lovely once you’ve found the one.

Psycho (15), Wed 9 Aug
Alfred Hitchcock, USA, 109 mins, 1960
In the words of Norman Bates, we all go a little mad sometimes. Hitchcock’s most twisted and stirring masterpiece takes to the big screen for a night of jumps and perfectly suspenseful thrills… and that infamous shower scene.

Hunt For The Wilderpeople (12A), Thu 10 Aug
Taika Waititi, New Zealand, 97 mins, 2016
Nature just got gangster. This off-kilter indie comedy smashed box offices across the world and made nearly every ‘best of 2016’ list going. In a rollercoaster ride through some of the funniest scenes you might see all year, an improbable pair take an unexpected journey through the New Zealand bush.

Rogue One: A Star Wars Story (12A), Fri 11 Aug
Gareth Edwards, USA, 131 mins, 2016
You just can’t beat watching an epic space story under the night sky and this year we’ve got a corker for you. Loaded with action and adventure this sleek, exhiliarating journey tells the story of a group of unlikely heroes who become responsible for stealing the plans to the Death Star.

La La Land (12A), Sat 12 Aug
Damian Chazelle, USA, 128 mins, 2016
They dance, they sing, they fall in love. Starring Ryan Gosling and Emma Stone, and winner of 5 Oscars, 5 Baftas and a triumph of other awards, La La Land brings the magic back to the movies.

Donnie Darko (15), Sun 13 Aug
Richard Kelly, USA, 113 mins, 2001
October 1988 and a small town is about to witness the end of the world. In a magnificently bizarre hybrid of suburban paranoia and apocalyptic teenage angst, a young Jake Gyllenhaal portrays brilliant but troubled teen Donnie Darko.