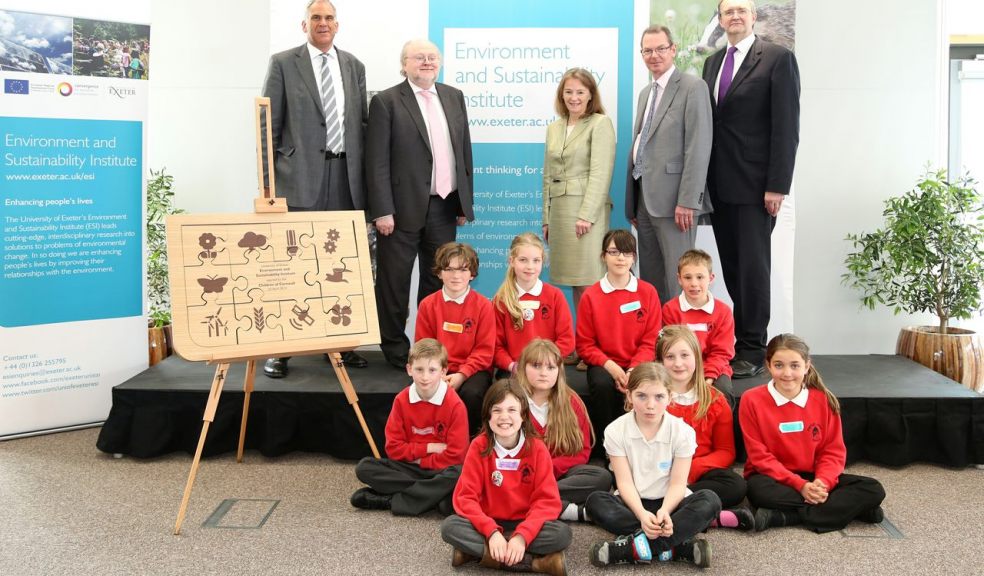 The Environment and Sustainability Institute (ESI), a £30 million environmental research institute at the University of Exeter’s Tremough Campus, Penryn, was formally opened on Tuesday 23 April by more than 120 local school children. The ESI leads cutting-edge interdisciplinary research to find solutions to the problems of environmental change and is working with local children to inspire them to take up careers in research.

As part of a week of activities to celebrate the opening of the ESI, students from local schools enjoyed hands-on workshops that demonstrated the institute’s research in action. Workshops included; Imagining Cornish Futures, Gold Resources: Past, Present, and Future as well as Tracking and Tracing Cornish Wildlife. The visiting students investigated not only current environmental problems but also considered what the future of Cornwall might be like.

Children who attended the workshops said: “It was really inspiring to talk to some of the country’s leading scientists who are working for what they believe in - they really do want to change the world for the better.”

“It was fascinating to learn about what they are researching right now and to see the actual equipment they use for research - not set up as in a presentation - but actually in their labs and offices.”

Inspiring children from Cornwall to consider a career in research was an important aspect of the day, particularly because environmental change is likely to become increasingly difficult to manage in the future. The students also had the opportunity to explore the specialist facilities and chat to leading researchers about topics ranging from shark tracking to the effect of street lighting on wildlife behaviour, and Japanese knotweed research to renewable energy prototypes.

“Although we have only just officially opened the building, the ESI team has been operating since November 2012 and has already assisted nearly 300 businesses in Cornwall, the Isles of Scilly and beyond by translating research into innovative business practice.”

The ESI helped Camborne company, Pump International, to provide safe drinking water in disaster zones and is also working with the National Lobster Hatchery in Padstow to investigate the effectiveness of their restocking programme.”

Housed in one of the most environmentally sustainable buildings in the UK, the architect designed ESI offers light filled lab space and collaborative working areas. Outside in the courtyard, nectar-rich wild flowers provide a valuable resource to local pollinators and bat boxes are installed high in the walls. On the roof, solar panels provide electricity while innovative energy transfer systems reduce elements of the building’s electrical demand by more than 90%.

Chris Pomfret, Chair of the Local Enterprise Partnership and Deputy Chair of the Convergence Local Management Committee, which steers the Convergence programme said: “The ESI will provide a tremendous boost for the region. The institute, enabled by a financial contribution from the European Regional Development Fund (ERDF), has already attracted 23 postgraduate students, research funding of £7 million and leading researchers from around the world have already filled 21 of the 23 academic posts. Importantly, the ESI has a clear intent to work with Cornish businesses large and small to help develop sustainable innovations, which will help drive the economic growth Cornwall needs and wants. We are looking forward to seeing Cornwall and the Isles of Scilly reaping the rewards that this new research institute will bring.”

The ESI has been enabled by investment from the ERDF Convergence Programme (£22.9 million) and the South West Regional Development Agency (£6.6 million) as well as support from the Higher Education funding Council for England (HEFCE).

Photos: Matt Jessop courtesy of the University of Exeter