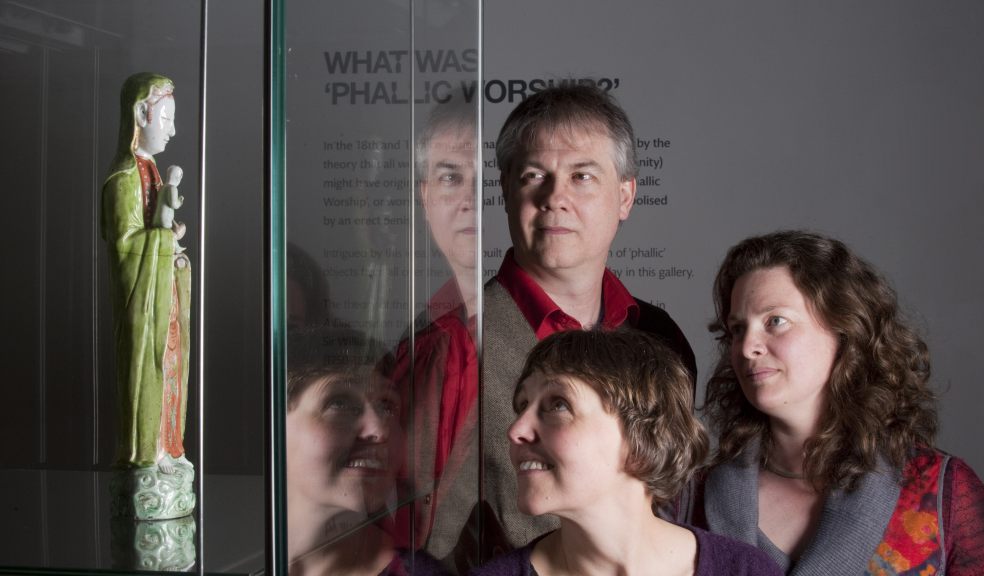 A partnership between Exeter’s Royal Albert Memorial Museum & Art Gallery (RAMM) and the University of Exeter has produced the first ever dedicated display of sexually related material from the Wellcome Collection and a new way for schools to tackle difficult topics in sex education.

Intimate Worlds: Exploring Sexuality through the Wellcome Collection opened in Exeter on Saturday 5 April. The displays include an 18th-century chastity belt, Roman phallic amulets worn by soldiers and children, an Ashanti fertility doll and a Ch’ing dynasty ivory copulating couple from late 19th-century China - all selected from the collection amassed by the billionaire pharmaceutical giant Sir Henry Wellcome between 1900 and his death in 1936 and now cared for by the Science Museum. Most have never been on public display and the significance of many only revealed during research for the exhibition.

The wide variety of attitudes and cultural practices embodied in the displays prompt visitors to question their own attitudes towards censorship and display, the boundaries between childhood and adulthood, control of sexuality, fertility and contraception, pleasure and power relations. The exhibition does not shy away from controversial issues and comes with the warning that ‘This exhibition contains sexually explicit material’. The artefacts are beautifully displayed and well researched. The interpretation is concise and informative but leaves the reader to draw their own conclusions.

From its inception, young people were involved in the development of the exhibition and the Sex and History teaching package. Led by Professor of History Kate Fisher and Classicist Dr Rebecca Langlands, Sex and History has produced a new “taster” teaching resource for secondary schools, which offers an effective way of addressing some of the most difficult issues in sex education - through the examination and discussion of ancient artefacts.

Their extensive research has shown that by creating a safe environment and using these historical artefacts to discuss how sexual practices and conventions have changed over the course of history, today’s young people can be encouraged to discuss their own views, ideas and concerns about sex.

As Dr Langlands explained, the objects were found to be the perfect catalyst for getting young people to talk openly about the issues that mattered to them when it came to sex. She said:

"They immediately kick started conversations with young people in a way that is usually very difficult to achieve in a classroom context. Traditionally sex education can be uncomfortable for teachers and pupils alike, and the availability of internet pornography poses new challenges. Young people are often well aware of the biological facts of reproduction, STIs and contraception, but lack the opportunity for discussion of important wider social issues such as body image, love, consent, and intimacy.”

Laura Kerslake is a lecturer in Ethics at Exeter College who has used the package. She was impressed by the way students openly discussed the sex related objects and their significance.She said:

“It’s also a great way to help teachers who may be faced with a wall of silence when teaching sex education. What was nice was seeing them looking at the different language they use to talk about sex and body parts, some of the students don’t have that vocabulary so it’s a way of getting them to talk about it and understand the terminology.”

More information on the Sex and History project is available on the University blog, Sex and History: Talking sex with objects from the past, http://blogs.exeter.ac.uk/sexandhistory/sex-and-relationships-education/