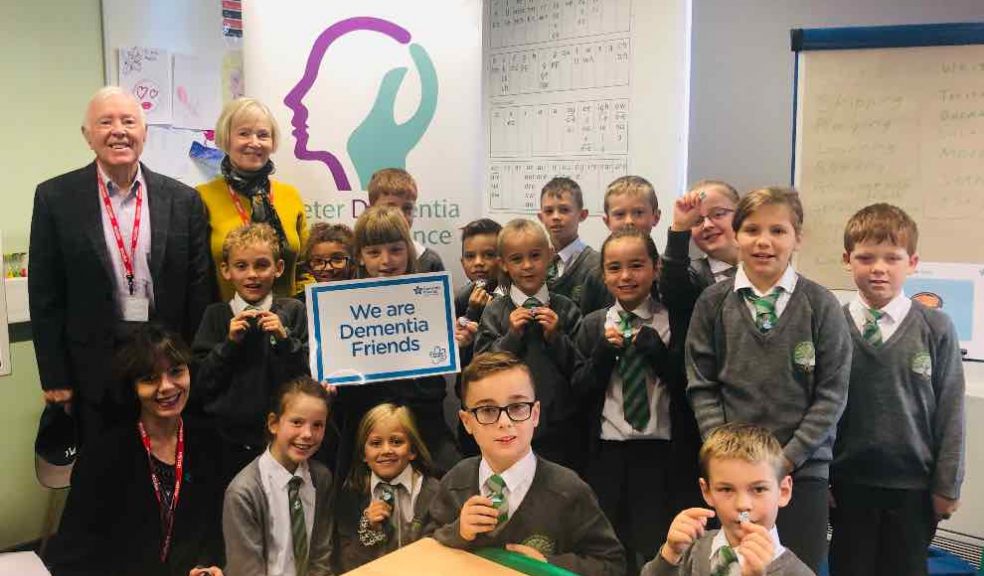 What an informative and moving morning had by all at Cranbrook Education Campus.

Sara and Barrie Carless who are living with dementia accompanied Gina Awad, Lead of the alliance as they delivered Dementia Friends sessions reaching 75 8-11 year olds. This was followed by an assembly presentation by Gina to the secondary students illustrating the work of the alliance and future visits to Cranbrook.

Louise Telford,  Deputy Head, said: “The students were really engaged with the presentation and we look forward to working with the alliance next year.”

The sessions with the younger children were engaging and emotive. All children keen to learn, which included a Q&A with Barrie and Sara giving the children plenty of time to ask them questions about what it’s like to live with dementia.

The morning formulated part of their personal, social and health education curriculum where the whole campus allocated time to walk and talk about dementia.

One teacher said: “I found the children were very intrigued to meet Barrie and his wife, they had questions before Gina arrived.

"The analogy used with the bookcase was wonderful; very useful, visual and a clear reminder for the children of how dementia attacks the memories stored.

"I believe more children would have had more questions for Barrie and Sara if timed had allowed, but the questions encouraged throughout the session allowed a lot of opportunities for ideas and stories to be shared.

"The badges were a beautiful gift, with the use of Dementia Friends, as they felt they were part of something bigger”.

Paul Reynolds, a Year 4/5 teacher, said: “I would like to say a massive thank you to Gina, Sara and Barrie who led a very thought provoking session for my class about dementia.

"Gina had some really good quality resources that allowed the children to understand dementia and how people live with it.

"Sara and Barrie were both fantastic at answering the children's questions and all the children have been very keen to wear their dementia friendly badges.

"Overall a fantastic session delivered at just the right level for my class.

"Cranbrook’s commitment to working in partnership with the alliance provided an invaluable morning."

Sara said: “Barrie and I thoroughly enjoyed our morning at Cranbrook, and were very impressed by the efforts being made to educate the children about living with dementia.

"We hope we were able to show them that it is possible to live a happy and fulfilling life in spite of Barrie's diagnosis. We were also impressed by the ethos of the school and the kindness the staff demonstrated towards the children.”

Gina finished by saying: “Being with the children and sharing these important messages was so richly rewarding for us all.

"Our work with children and young people is vital and an area of focus for us in the coming years.

"One child from his learning acknowledged how 'feelings matter' which is true for us all but particularly for people with dementia when facts and memories may fade.”