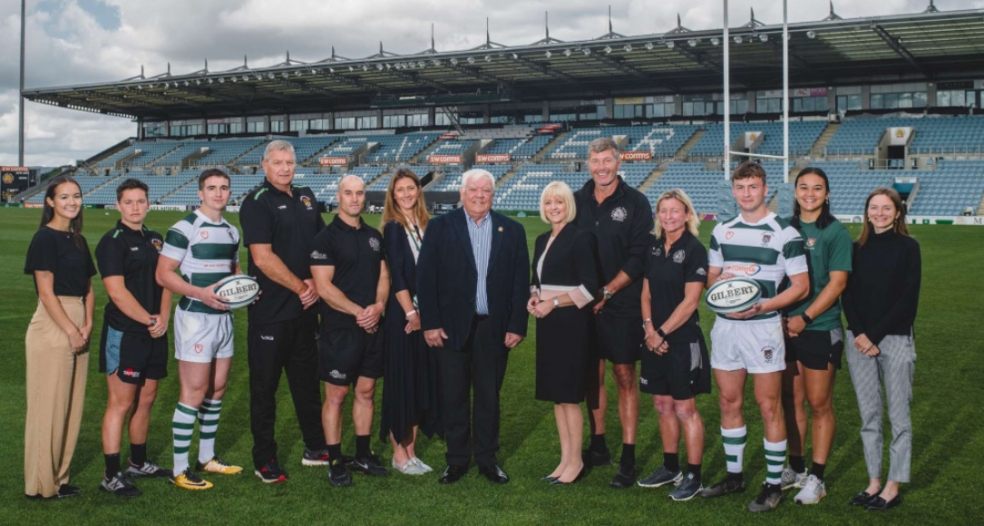 The University of Exeter has bolstered its long-standing partnership with the Exeter Chiefs by entering into a new strategic and sponsorship agreement.

The pivotal new partnership will not only open up new employment opportunities for Exeter students, but also help boost the profile of two of the South-West region’s most influential and world-leading organisations.

Building on a strong relationship stretching back decades, and pre-dating the Chief’s meteoric rise to the pinnacle of top-flight rugby, the new agreement will come into force ahead of the 2022/23 season.

The partnership will see students from the University provided with extended employability opportunities, as Graduate Business Partners with the Chiefs, across a range of departments, including their commercial and marketing division.

The University’s logo and branding will also appear at the Chief’s Sandy Park stadium, as well as adorning the kit of both the men and women’s first team squads.

“It brings together two great, global organisations to work in partnership to benefit Exeter, the South-West region and everyone associated with the institutions.

“We have worked as partners for a number of decades, achieving remarkable pathways for our students to meet not just their academic, but also their professional ambitions, through exceptional mentoring and coaching schemes.

“This new agreement will help take this relationship to the next levels, and bring real benefits to our students, and the Chiefs, in the coming years and beyond.”

Exeter Chiefs Chairman and Chief Executive, Tony Rowe OBE, expressed his pleasure at the announcement, saying: “We are delighted to further underline our relationship with the University of Exeter, a partnership that has proved to be hugely successful for many years.

“The exchange of talent between our two organisations is a fruitful development pathway and I look forward to seeing the next generation of young stars progress both on and off the playing field.”

The heritage behind the partnership between the University and the Chiefs can be traced back to the 19th century. The Chiefs, then known as Exeter Rugby Football Club, played its inaugural match in 1872 against St Luke’s College – the precursor to the Exeter University RFC.

More recently, the University of Exeter and the Exeter Chiefs have developed a flourishing partnership centred around the University’s athletic and research programmes.

This world-leading research was recently recognised through the results of the Research Excellence Framework 2021, released in May of this year, that ranked Sport Science at Exeter first in the UK.

University of Exeter Sport has enjoyed a fruitful and rewarding affiliation with the Chiefs, which has helped support the development of our talented athletes to achieve their ambitions of playing professional sport at the highest level.

Some of the most notable names to have attended the University and gone on to play international rugby include Henry Slade, Sam Skinner and Jack Maunder.

A host of current players and coaches at Exeter Chiefs work across the University’s rugby programmes, providing opportunities for coaching and mentoring with individual players.

University of Exeter Sport alumni and former Chiefs player, Haydn Thomas, also works as a coach at the rugby club, providing an intrinsic link between the two organisations. Haydn works closely with the University of Exeter Director of Rugby, Keith Fleming, who is embedded within the Chiefs and regularly supports as match day manager.

The University of Exeter Women’s Rugby team and the Chiefs also have a strong relationship. England International Poppy Leitch, who co-captains the Chiefs, also acts as Head Coach for the University’s women’s rugby programme, while a large number of the current Chiefs squad either currently study, or have previously studied, at Exeter.

The University of Exeter played an active role in developing the Chiefs’ new logo, revealed earlier this year, with academics from the History department researching the origins of the club and local history for the new logo.