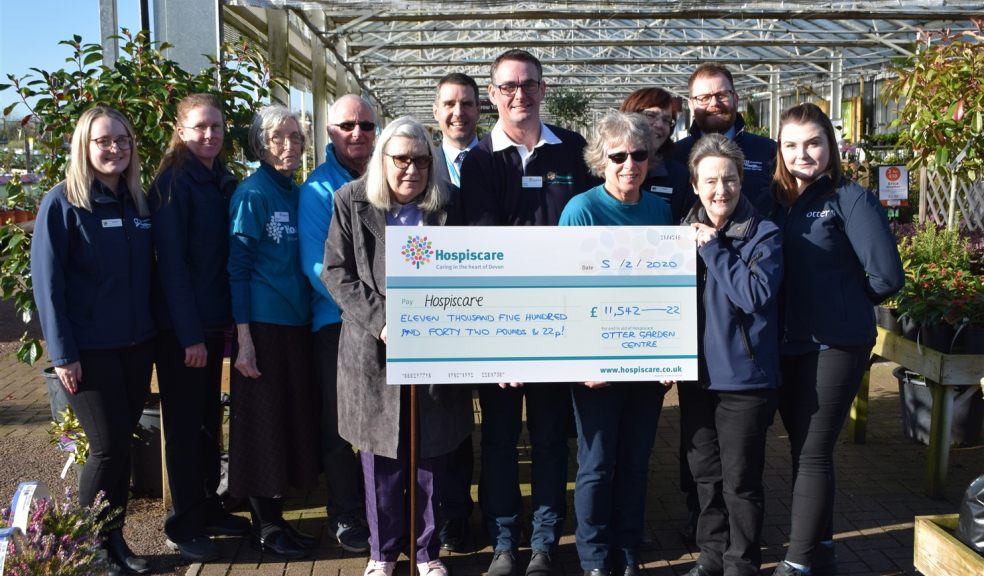 The charity team at Otter Garden Centre in Ottery St Mary has revealed the total raised for their 2019 charity of the year, Hospiscare.

The team were delighted to announce that the final total soared over £11,500.

Branch Manager, John Giblin said: “Our fundraising efforts were helped immensely by the help we had from the Otter Vale Friends of Hospiscare, a local group of volunteers who supported many of our fundraising activities.

“They were amazing and worked really hard to make the partnership a success, which is reflected in the brilliant amount raised.”

The volunteers were headed up by Steve Pearcy, whose wife received end of life support from the adult hospice charity.

Events run throughout the year included a tombola at the garden centre in April and another at the Ottery Food & Families Festival in June. Fundraising at staff-held quiz nights and two bingo nights, was terrific.

“On one of the bingo nights the weather was terrible and we were worried we’d have a low turnout,” explained John.

“We were amazed as family members and friends of the Hospiscare volunteers kept coming through the doors – in the end the event was a huge success and on its own raised over £1,000 for the charity!”

Richard Cousins from Hospiscare said: “I would like to thank everyone who contributed to the fundraising over the year; our amazing volunteers, all the wonderful staff at Otter Garden Centre, and customers who donated so generously.

“The money raised will cover the costs of 225 visits by Hospiscare nurses to patients in the East Devon area and will allow us as a charity to really make a difference in the local community.”

Otter Garden Centre in Ottery will continue their support of Hospiscare in 2020 as the charity launches its Hospiscare@Home appeal in East Devon, and the volunteers from Otter Vale Friends are looking forward to another successful fundraising year and to equal - if not better - last year’s total.