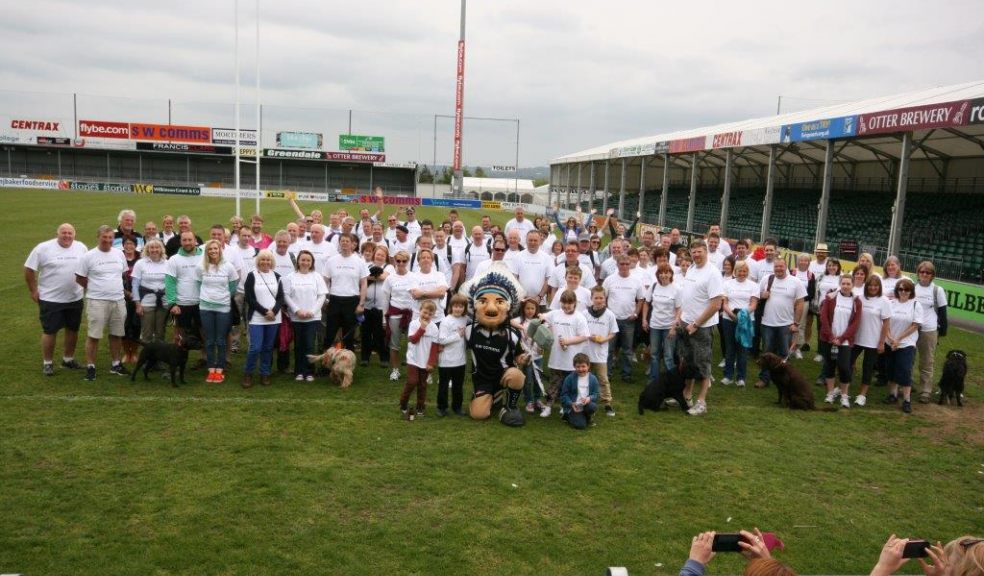 In 2011, 25 intrepid ‘Yompers’ meandered their way across the hills and vales of Exeter and the surrounding countryside culminating with a celebration at Woodbury Park and, thanks to the fundraising efforts, a cheque for £2,500 presented to The Exeter Chiefs very own charity – The Exeter Foundation, who provide the city of Exeter and its surrounding areas with a ‘Civic Trust’ that promotes our community and pursues the vision of people who live and work here through a variety of local charities.

The Foundation acts as a fundraising body with a commitment to the future prosperity of Greater Exeter, and also as a vehicle for promoting collective civic pride.

The inaugural event was such a success that Northcott Beaton endeavoured to make ‘The Pukka Yomp’ a more regular event. Two careful years in the planning meant that 2013 could deliver a more spectacular result. This was achieved by making the event more accessible to families and children by dropping the distance from 20 miles to 12, the advent of a family walk round the Chiefs hallowed turf and a variety of entertainment upon the conquering ‘Yompers’ return.

Sandy Park was the venue for this year’s circular event and at midday... they were off! Over 125 hearty souls purposefully strode out of sight, map in hand for what would be 3 hours of collective support for the gaggle of charities under The Foundation’s umbrella. Whilst the main walk was underway, an extremely determined group of youngsters galloped around the Sandy Park pitch and joined the cause with huge amounts of excitement and vigour (some of whom completed 52 laps which is equal to 13 miles and further than all of those on the main walk).

By the time our journeymen started trickling in, Sandy Park was in full swing with a bouncy castle and Rugby Tots (courtesy of Gareth Horrocks who provides a fun and educational environment for 2-5 year olds to learn the principles and enjoyment associated with rugby) for the youngsters, a well-deserved hog roast, some liquid refreshment and live music from the very excellent Last Band Standing.

It proved to be a fantastic event, enjoyed by all, which was sweetened when the initial figures were totted up. Thanks to the superb fundraising efforts and generosity of the local businesses listed below Northcott Beaton are hoping to be able to present a cheque for over £12,500 to The Exeter Foundation which will in turn be distributed to the benefiting charities all of whom operate within our, proven, great community.

Such was the success of this event that Northcott Beaton are already planning the same event for next year. If you would like more information about The Pukka Yomp 2014 or if you would like to donate towards this year’s event please email andy@northcottbeaton.co.uk or follow this link