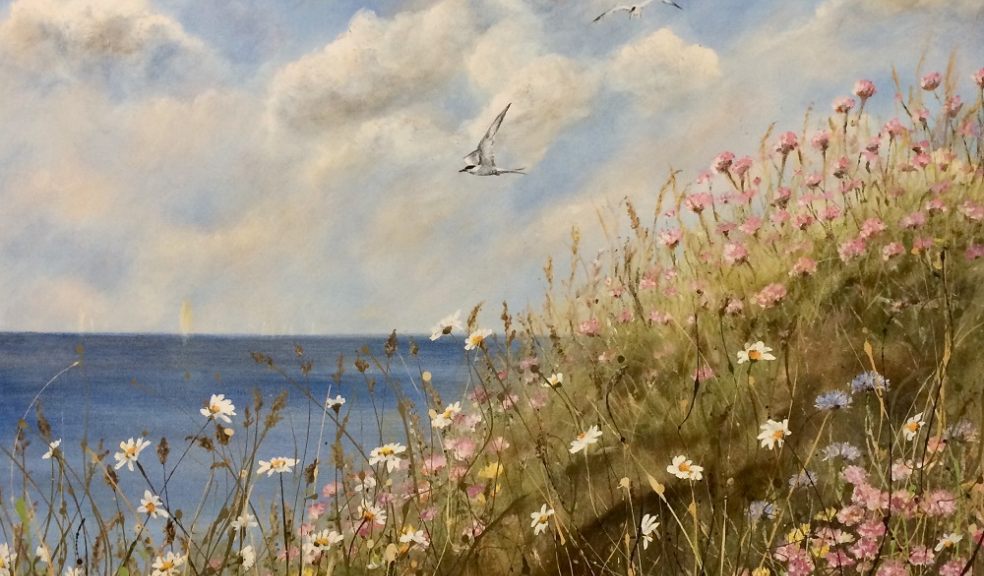 Joan Prowse, Helen Workman and Roy Anderson – or Fotos, Flowers and Felt as they like to be known – are exhibiting at Joan’s Studio during Devon Open Studios, taking place 7th to 22nd September; the studio will be open to the public, providing an opportunity to view the four pieces being auctioned, along with the artists’ other work.

Joan works in many different media and has donated ‘On the Crest of the Wave’, an original framed needle felted piece, and a limited-run framed Giclee print ‘Wintering Birds’ – Chaffinch. Helen’s paintings are inspired by the natural world and she has donated a signed canvas print, ‘Around the Cliff’, for auction. Roy is a landscape/animal photographer and has donated a mounted photographic print – ‘A Dartmoor Tale’.

For those unable to view the art in person, full details of the artwork and auction can be found at www.rainbowliving.org.uk/get-involved/events/charity-art-auction.

All proceeds from the auction will go to Rainbow Living, a local volunteer-run charity providing accommodation for adults with learning and other disability, to support fundraising for Rainbow House Four. Over the last 10 years, Rainbow Living has enjoyed success with its unique housing model, which enables adults with learning and other disability to live with their peers in specially adapted accommodation, designed to promote and encourage independent supported living. The charity has continued to see growth in demand for its services locally, and hopes that Rainbow House Four will help to fill some of the void in the provision of long-term supported accommodation in the local area.

Email: email your name, contact details, name of the piece and bid amount to janet@rainbowliving.org.uk.

Winning bids will be announced shortly after 22nd September.

Joan said: “I’m delighted that we as local artists can support a local charity in this way. Rainbow Living is run by volunteers who work tirelessly to give opportunities to young adults with additional needs which wouldn’t otherwise be available to them. We hope there will be lots of interest in the art being auctioned and to raise lots of money for Rainbow Living’s fourth Rainbow House in the Exeter area.”

Ruth Airdrie from Rainbow Living said: “We are so grateful to Joan, Helen and Roy for donating some of their original art to Rainbow Living. Running an auction is something new for us as a charity, but we hope there will be lots of interest and support in this new endeavour. All funds raised from the auction will go towards our fundraising total for Rainbow House Four and will make a real difference to the lives of young adults with disabilities well into the future.”