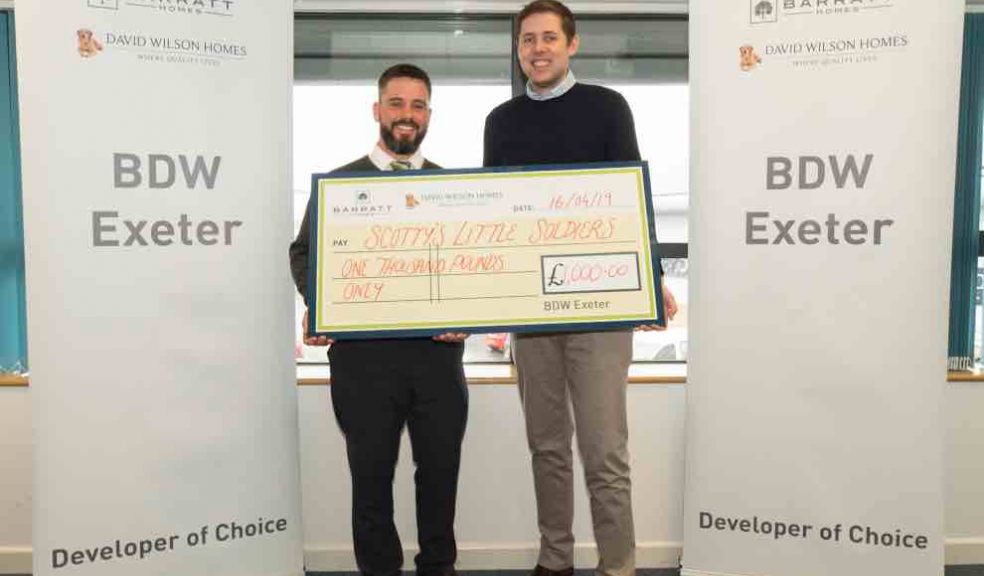 A charity that supports children and young people who have lost a parent while serving in the British Armed Forces has received a £1,000 windfall from Barratt Homes in Exeter.

The Barratt Homes Community Fund donates £1,000 each month to a charity or organisation and the new scheme is part of the company’s pledge to strengthen its ties with the areas in which it is building new homes.

Scotty’s Little Soldiers is one of the first recipients of the new fund and the charity has a special place in the heart of one Barratt Homes employee, Sam Jones, who nominated the charity for the donation.

“The charity provides its beneficiaries with support and guidance throughout their childhood and offers a respite, however brief, from the daily ups and downs of coping with the loss of a parent,” said Sam.

Assistance is available to families from the British Army, Royal Navy or RAF and is not limited to those killed in action.

Huw Llewellyn, managing director of Barratt Homes in Exeter, said: “Being able to support charities like this is one of the most rewarding parts of what we do. The charity provides such a valuable service to families and we are pleased to be able to make this contribution to its work.”

To find out more about Scotty’s Little Soliders visit http://scottyslittlesoldiers.co.uk/

Barratt Homes and David Wilson Homes in Exeter also supports the Exeter Foundation and is inviting charities and organisations to apply for one of its monthly grants. Organisations can apply by emailing exetercharity@barratthomes.co.uk with details of your charity or organisation and how the donation would benefit the local community and improve lives.