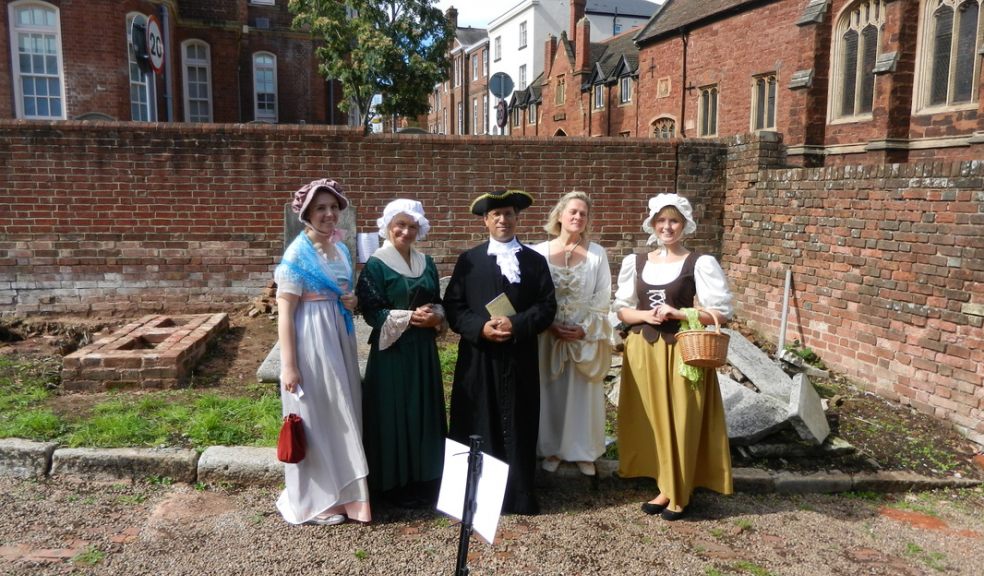 A historically-important city graveyard, which has been brought back from neglect and disrepair, will be on display to the public this weekend as part of an national heritage event. <SEPT 10-11>

At least 1,300 Dissenters - Protestants who dissented from the strictures of the Anglican Church - were buried in a small plot off Magdalen Road in Exeter between 1748 and 1854– known as the Dissenters’ Graveyard.

The graveyard will be open to the public this Saturday <September 10> and Sunday <September 11> for visitors to discover the progress made on the renovation of the graveyard and view the biographies of people buried there as part of this weekend’s National Heritage Open Day event..

The site, which has been owned by various church groups, passed into private ownership in the 1980s. It was saved from further decline and ultimately commercial development when it was bought by the Exeter Dissenters’ Graveyard Trust (EDGT) in 2015.

City firm Cartridges Law has supported the work of the EDGT since its inception, through donations of funds and volunteer time.

Bridget Garrood, partner and family lawyer at Cartridges Law, is a member of the trust’s research group. She said the open day was a great opportunity for people to find out more about this fascinating site.

She added: ‘It is important to support the local community. The partners are proud that the firm has been able to provide expertise, and members of our staff have donated their time to help restore this historically-important site.

‘We also made a donation towards the restoration of memorial 63 to members of the extended  the Hill family, chosen because there was such a  strong St Thomas connection, but also because the researchers uncovered a good deal of interesting evidence to show  the legal events surrounding their business and personal lives. This included wills, business partnership and disputes in court, plus bankruptcy, as well as the honouring family births, marriages and deaths.

‘Almost 250 years ago Thomas Hill married Indiana Westcott on 21 January 1767 in the parish church of St Thomas the Apostle Exeter. John Hill was Thomas and Indiana’s eldest son.  He became a Druggist at his shop at 196 Fore Street in Exeter.

An 1805 advertisement in Exeter Flying Post shows the sale by John Hill of  ‘Dr Anderson’s Scots Pills for disorders of the stomach and bowels, bilious, gouty and rheumatic complaints, headaches, want of appetite, indigestion and in all obstructions’ .

Despite the supply of such remedies by John, a Mrs Hill, who is believed by the researchers to be Indiana Hill, John’s  widowed mother, was buried in the Dissenters graveyard on 16 February 1812.

The Dissenters’ Graveyard is a significant physical remnant of the nonconformist tradition in Exeter. Dissenter community was an important part of the city's commercial, religious and political life, particularly during the eighteenth and first half of the nineteenth centuries.

The graveyard is situated at the junction of Magdalen Street and Bull Meadow Road. It will be open from 11am until 4pm on Saturday and Sunday. There will also be an artistic recreation of the lives of some Dissenters in Exeter with costumed actors leading a tour of the city, ending at the graveyard.

Cartridges Law are sponsoring this year’s tour, helping to ensure it can be offered free of charge. Actors on the tour will re-create the stories of some of the dissenters.

The tour will meet at the Cathedral on Saturday 10th September at 11 am and again at 2pm, visiting significant sights and ending at the Dissenters Graveyard itself. Booking is free but essential by telephoning 01392 665885.

For more information about the Exeter Dissenters’ Graveyard Trust (EDGT) visit the website at www.edgt.org.uk

For more information about the open day visit https://www.heritageopendays.org.uk/visiting/event/dissenters-graveyard,