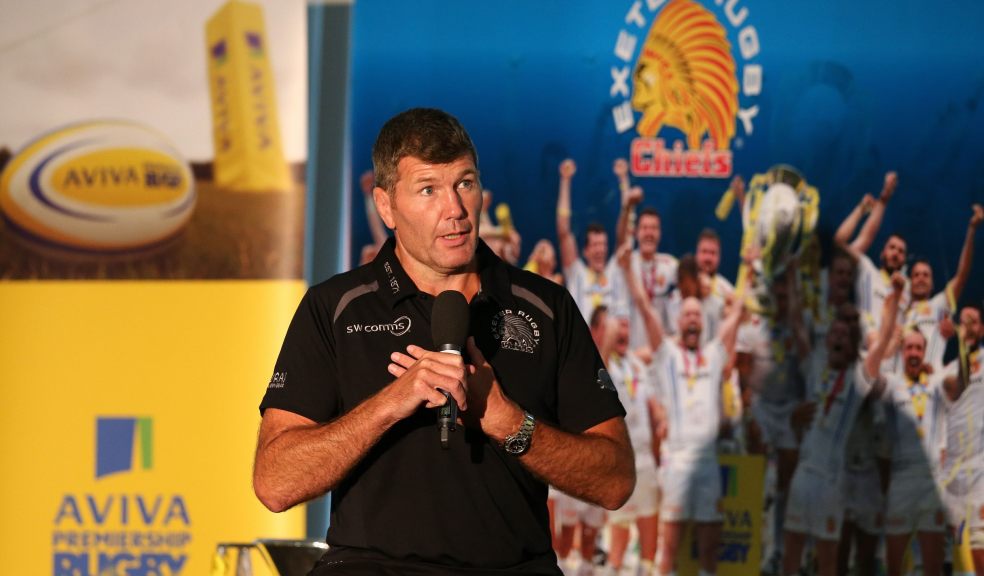 Exeter Chiefs Director of Rugby Rob Baxter says he and his team are relishing the prospect of defending their Aviva Premiership title this season.

Baxter outlined his side's vision for the new 2017/18 campaign at the first-ever Fixtures Brunch held at the club's Sandy Park home.

In welcoming over 300 guests to Exeter's Premier Conferencing & Banqueting Centre, Baxter - together with first-team stars Mitch Lees, Alec Hepburn, Phil Dollman and Dave Ewers - reflected not only on the triumph of last season, but also spelt out the club's desire to push on even further this term.

The brunch attendees not only got to find out the new Aviva Premiership fixtures, but they were able to listen in on special Q&A sessions with Baxter and his players, before tucking into a hearty, full English breakfast.

Also on show was the Aviva Premiership Trophy the Chiefs lifted at Twickenham in May when they defeated rivals Wasps after extra-time.

Looking ahead to the new season, which starts on Friday, September 1 with an away trip to Gloucester, Baxter said: "In a lot of ways, Gloucester is a really good starting fixture for us because the players will look at it and know it is a big challenge and we will know we have to start very well.

“Gloucester away last season was our last fixture in the scheduled season and I thought we had to play very well that day to get the points we did out of thet game to guarantee ourselves that home semi-final. We have got to hope we can go up there, perform at a high level again, and maybe continue where we left off on our current league form.

“We know it will be a fantastic challenge very early in the season. The weather should be good, the pitch will be in excellent condition, and everyone is aware the Kingsholm crowd will be very vocal, so it’s a good test for us. Gloucester, we know, will be buoyed by some new signings and a new head coach, so it is a very interesting start point for us.”

With the Cherry & Whites first up, the Chiefs will then entertain newly-promoted London Irish, before clashes with Worcester Warriors (away) and old rivals Wasps a week later. The month of September concludes with a third away day at Leicester Tigers.

Baxter, though, is relishing what lies ahead, adding: “It doesn’t matter who won the Aviva Premiership last season, the league table right now says zero points and we have got to start collecting them again.

“That first group of fixtures of going away at Gloucester, having London Irish come to us and they will have a point to prove, and then going away to Worcester where last season where we had a really tough fixture and a hell of a lot of points were scored, and then having the regular enemy in Wasps back here in our fourth game. If you’re a supporter, it is an absolutely fantastic block of games within the space of a month.”