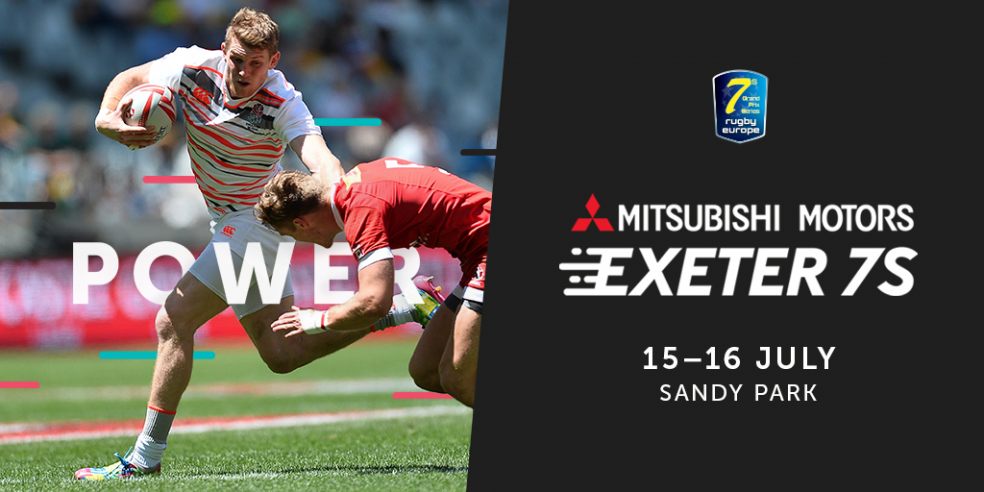 The biggest rugby sevens festival in the South West returns to Exeter on July  15th and 16th, with 12 international European teams competing in the Mitsubishi Motors Exeter 7s at Sandy Park and the best amateur teams playing in the SW Rugby 7s at Topsham Sports Ground.

Thousands of spectators have packed Sandy Park in the previous two Exeter 7s events and this year’s tournament is set to be even bigger and better, with more rugby and entertainment on offer for fans.

The Mitsubishi Motors Exeter 7s is the final leg of the Rugby Europe Sevens Series, which started in Russia on June 3rd and 4th.

Sevens events around the world have gained a reputation for having a carnival atmosphere, and the Mitsubishi Motors Exeter 7s promises to deliver this with a Wild West fancy dress theme, with some great prizes on offer for the best costumes, a ‘fanzone’ with rugby themed activation and family fun, plus a Real Ale & Cider festival in association with Heineken and Otter Brewery. There will also be live music on Saturday evening, with Exeter band Basher Tate keeping the party going at Sandy Park.

Tickets for the Mitsubishi Motors Exeter 7s are available to buy at www.sandypark.co.uk/sevens

In addition to the sporting action across the weekend, Sandy Park will host a launch night for the Wild West Real Ale & Cider Festival on Friday 14th July.

Tickets for this event are priced at £7 and include a commemorative half pint cup, 3 x half pints and live music from Not the Cowboys. Tickets are available at www.sandypark.co.uk/book

We have a signed  England 7s shirt to give away.

Who won their second London sevens title at the 2017 competition?

Email your answer along with your name, address, telephone number and email address to ted@thedailyuk.com by noon on Thursday 13th July 2017.

The winner of the England Rugby Sevens shirt, drawn from the correct entries received, is Owen Yapp from Exeter.

The correct answer to the question above is, of course, C) Scotland.

Thank you to everyone who entered - don't forget, there is still time to get tickets for this weekend's Rugby 7s action at Sandy Park!