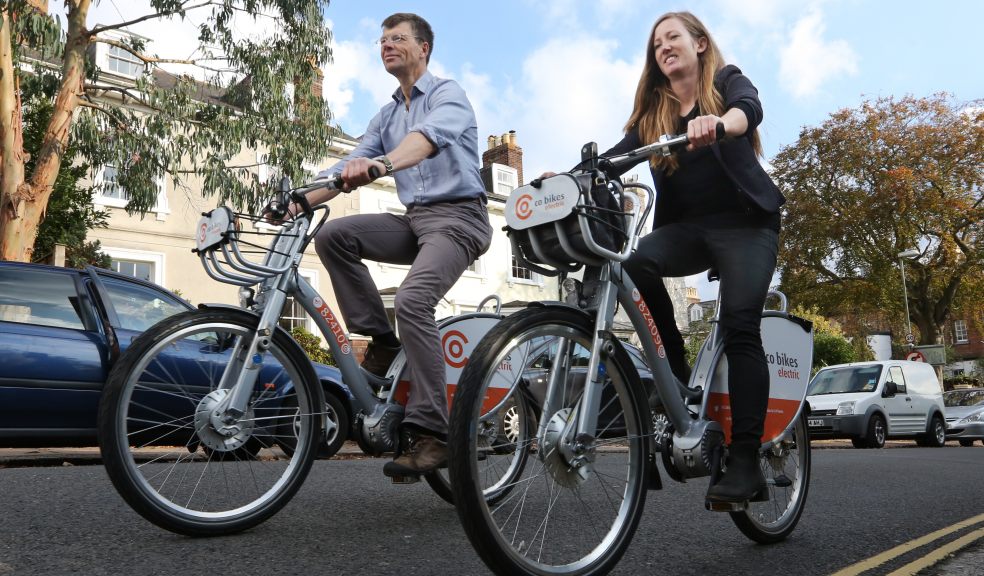 Co-bikes, the ground-breaking self-service bike scheme, is introducing the latest stage in its mission to create easy, enjoyable travel in Exeter's city centre.

The latest hire location, going live on Wednesday 1 March, is in the heart of the city centre, next to the Civic Centre, opposite the Tourist Information Centre.

Staff will be at the docking station from 10.00 – 16.00 to tell you more about this innovative scheme.

Co-bikes, the first city-wide network of electric bikes for self-service hire by the public from on-street docking stations, was launched on 13th October 2016. Riders can hire, ride and drop the bikes off at any Co-bikes site – much like London’s ‘Boris Bike’ concept except purely with electric bikes.

The bikes are already available at Exeter Central train station, Exeter University and Sowton Park and Ride, with the County Hall dock coming on-line in March as well.  Each dock has 4-8 bikes. By Summer 2017 the scheme will be extended to 8 sites in and around the city.

Mark Hodgson, Managing Director of Co-bikes and Co-cars said: 130 people have already become members, helping them link up other transport options in the way that best suits them. We have already seen that, by offering electric assisted bikes on hire, it is encouraging people onto bikes for the first time or back onto bikes after a long break. They have made journeys varying from accessing Exeter to all the way down the Exe Estuary.”

“The Co-bikes electric bikes are changing the way that people travel around the city and are affordable and easy as well as being great fun to ride! We all know that our cities are becoming more congested and spread-out, and a travel revolution is needed to help people more easily, quickly, enjoyably and affordably reach their business, study or leisure destinations. Electric bikes are the catalyst for this revolution and for an easy, enjoyable, electric Exeter”.

Councillor Stuart Hughes, Devon County Council Cabinet Member for Highway Management, said: “Co-bikes has made an impressive start since launching in Exeter, and it is excellent news that extra docking sites are being added to the network across the city over the coming months. Cycling is a convenient way to travel around Exeter and the electric bikes make it that bit easier for many people. The scheme is already showing that with the facilities in place, people are willing to make the switch to sustainable travel.”

Cllr Phil Bialyk, Exeter City Council’s Lead Councillor for Sport, Health and Wellbeing, said: “It’s great news that the scheme is being expanded across Exeter and I would urge anyone to give the bikes a go. Co-bikes offer a healthy alternative to the car or the bus, reduce our dependency on the car and help reduce congestion in the city.”

Co-bikes is the brainchild of the team behind Exeter-based Co-cars, the fastest-growing hire-by-the-hour car club in the South West, with cars available across Exeter, and other locations in Devon, Dorset, Wiltshire and Cornwall. While the bikes are available for hire by anyone on spec, Co-bikes also offers joint membership with Co-cars. With this unique hiring scheme, a single smart card will give members access to all of the bikes and cars under the Co-bikes/Co-cars umbrella. This is the first one-card membership scheme for car and bike hire in the UK.