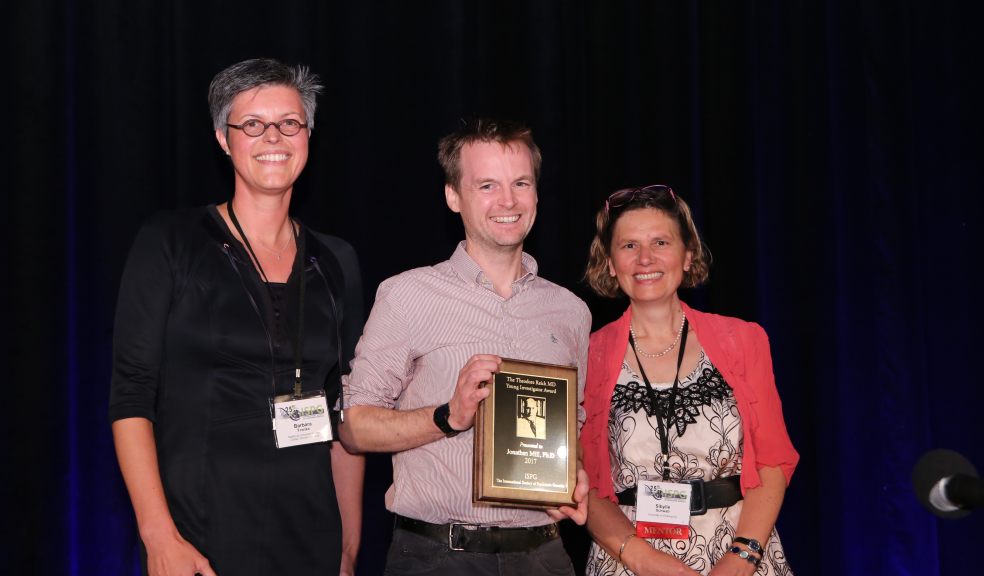 A genetics researcher has won a prestigious award from the International Society of Psychiatric Genetics (ISPG) for his work on diseases that affect the brain.

Professor Jonathan Mill, of the University of Exeter Medical School, has been presented with the 2017 Theodore Reich Young Investigator Award, a prize which celebrates exceptional research in the field of psychiatric genetics.

The award is named after Theodore (Ted) Reich (1938-2003) who was the first President of the ISPG and was both an outstanding researcher and mentor to young scientists. The award was presented at the recent World Congress of Psychiatric Genetics in Orlando, Florida, an annual international conference for experts in the field.

Professor Mill leads the Complex Disease Epigenetics Group, a team which focuses on understanding the way in which genes function in the brain, and how changes in their activity may influence mental health and disease. Professor Mill’s research explores gene regulation in diseases including schizophrenia, bipolar disorder, Alzheimer’s disease and autism.

Professor Mill said: “I’m delighted and honoured to accept this award. It’s a really exciting time to be working in the field of psychiatric genomics and we’re starting to make real discoveries about the biological underpinnings of diseases like schizophrenia and autism. Hopefully we can translate these findings into new treatments and therapies in the near future, and we’re excited to continue the growth and advancement of our research here at Exeter.”

Dr Barbara Franke, who presented the award, said: "Congratulations to Professor Mill. Winning this award, among such excellent competition, is an outstanding achievement. The work of this exceptional researcher and his group is already profoundly changing our understanding of complex brain diseases, and may even be expected to pave the way towards novel treatment approaches for such diseases, which make major contributions to global health. On top of scientific excellence, Professor Mill is a role model to others through his open, integrative, and collaborative spirit in performing research."

Professor Mill’s prize comes after his co-investigator, Dr Katie Lunnon, won the Early Career Investigator of the Year Award at the Alzheimer’s Research UK Conference 2017. Dr Lunnon was awarded the prize earlier this year, along with a £25,000 research grant for her work investigating dementia.

Professor Clive Ballard, Executive Dean of the University of Exeter Medical School, said: “Congratulations to Professor Mill and the team. They have developed an excellent global reputation, and we’re immensely proud of their achievements this year. They are truly world-leading and are having a real impact on the understanding of genomics and how it influences our health, which will be essential in heralding the next generation of new treatments.”