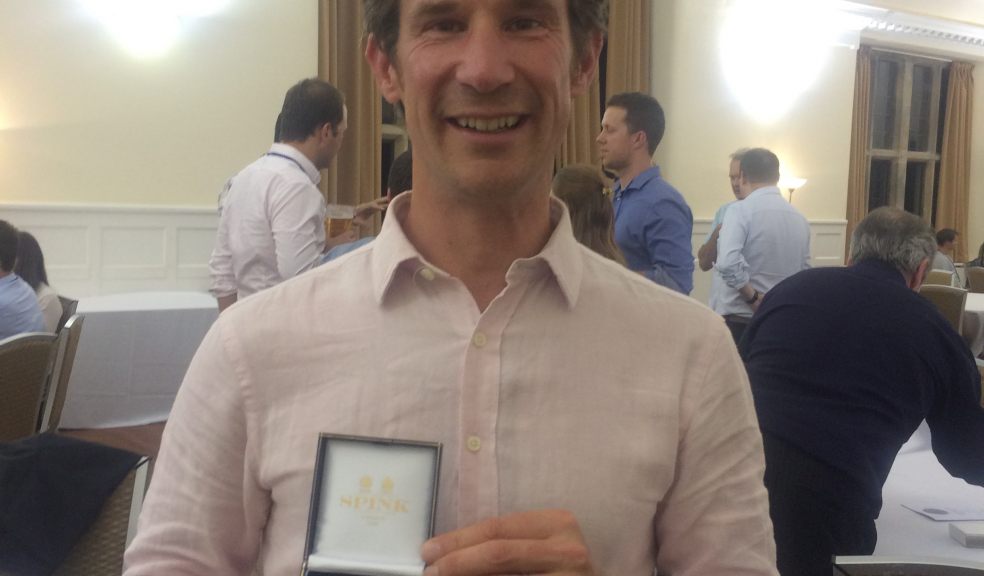 A University of Exeter marine biologist has won a prestigious award for his world-class work in the field of fish ecology.

Professor Steve Simpson, Associate Professor in Marine Biology and Global Change, received a medal from the Fisheries Society of the British Isles (FSBI), a learned society that promotes the interests of fish biology and fisheries management, at a recent Symposium held in Bangor.

The FSBI medal is awarded annually to younger scientists who have made exceptional advances in the study of fish biology and/or fisheries science and Professor Simpson was commended for his outstanding research in the field of fish behaviour and ecology.

Professor Simpson leads a research group in the University of Exeter’s centre for Biosciences and his interests are in the behaviour of coral reef fishes, bioacoustics, effects of climate change on marine ecosystems, conservation and management.  He has also been a Natural Environment Research Council (NERC) Knowledge Exchange Fellow, which saw him developing strong links between the research community and industry and policy on the themes of European Fisheries and Climate Change, and Anthropogenic Noise and Marine Ecosystems.

In announcing the award FSBI President Dr Iain Barber said that Professor Simpson was ‘a most worthy’ winner of the medal for his world-class work in bioacoustics and important insights into the behavioural and physiological consequences of noise pollution.

Dr Barber said: “This is an important new field, and Steve has positioned himself at the forefront of it. In the relatively short time that has passed since his PhD studies, Steve has addressed many of the most important scientific challenges facing fish in the marine environment, including the impact of climate change on fish populations, the consequences of ocean acidification, and perhaps most notably the impact of anthropogenic noise on fish and fish larvae. Steve is widely regarded and recognised throughout the world, he has strong links to government institutes and to policy makers, and he has an enviable publication record for someone so early in his career.”

Dr Barber also commended Professor Simpson for his passion and aptitude for communicating science to the public and to industry and for his regular work in the media. His work has featured in newspaper articles, on radio and on television and he has worked with the BBC Natural History unit and David Attenborough on the recent Great Barrier Reef series, and on the forthcoming Blue Planet series that is scheduled for broadcast in 2017.

Professor Simpson was also praised for his teaching on a wide range of undergraduate modules and field courses.

Dr Barber added: “He is now inspiring the next generation of fish biologists, and judging by the fact that he was recently ranked by Exeter biology students as providing the highest ‘quality of feedback’ – he takes his teaching just a seriously as he takes his research.”

Professor Simpson said: "I was surprised and honoured to be chosen for this year's medal. It is a credit to all my students and collaborators who have worked alongside me on some exhilarating expeditions and long days in the lab. I am delighted to join a group that includes some of my fishiest heroes."