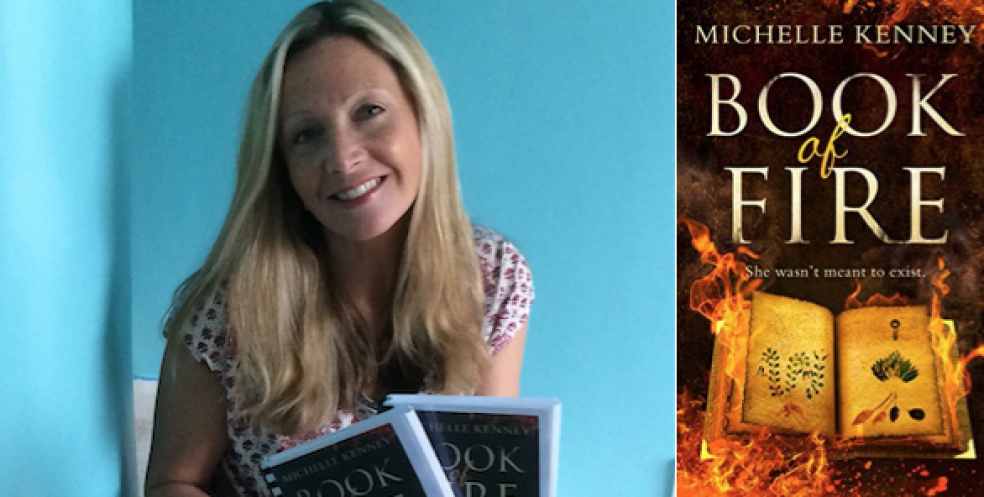 A Devon author is celebrating after securing a three-book deal with Harper Collins HQ for her young adult fiction series, Book of Fire.

Michelle Kenney, who lives in Devon, released her first book on Friday 25 August and has already featured in Amazon’s top 10 list for the young adult (YA) genre.

Book of Fire is a dystopian fantasy novel following the lives of twins, Eli and Talia. Heavily influenced by ancient Rome, mythology and the baffling medieval Voynich Manuscript, Book of Fire is set in and around Exeter and its famous Roman landmarks. It explores an apocalyptical world in which nature and science clash with catastrophic effects.

Speaking about the inspiration behind her book, Michelle smiles: “It actually started with a herb! On a visit to the Colosseum in Rome a few years ago, I happened to notice the occasional scent of lavender. When I asked the guide, she explained they used to tie up bunches of lavender in the days of gladiatorial fighting to cover the scent of bloodshed, and had begun replicating the practice in the building.
"It was such a little detail, but one that stayed with me.

“Then a few years later, I read that the Voynich Manuscript is believed to have Italian Renaissance roots and has never been decrypted despite today's scientific technology, and that really intrigued me. Finally, I have always loved classical stories and Mythology so the idea started germinating – why not combine all three interests into one, action-packed dystopian adventure?”
Securing her book deal was a dream come true for Michelle. She said: “I’d been writing (alongside managing a growing family and part-time work) for about five years, and got quite used to the peaks and troughs of writing. I’d managed to gain a fabulous YA agent, Chloe Seager, and we were working on a new book while Book of Fire was doing the publisher rounds. But I still didn’t really believe I’d ever get a deal, as I knew the book industry was so competitive. When Chloe told me she’d received an offer for a trilogy I have to admit I cried!”

Since graduating from Leeds Beckett in 2003, Michelle has had a successful career in PR, beginning with an in-house position at Teignbridge District Council in South Devon before moving her way up the ranks. She explained: “I ended up as Head of Communications with a five-strong team,covering every aspect of communications, from multimedia to magazines, for the local authority. After the birth of my first daughter I set up my own media and PR consultancy, and contracted for South Devon companies such as the fantastic Dartington Arts.

“My Advanced Professional Diploma was my first real qualification in Media and PR as my first degree was in Law, from Reading University. It gave me massive confidence in the workplace, and inspired me to go on and study for the Diploma in Public Relations with the CIPR. I ended up becoming a Member and Accredited Practitioner with the CIPR which enabled me to rise through the ranks in my workplace, and eventually head up a team. We handled everything from sewage spills to supporting the arts in the community. While learning the ropes in any new career is nerve-wracking, my years as a PR practitioner have taught me about people - and writing is no different from other forms of communication in that the more you listen, the more realistic it becomes.”

Michelle’s advice for aspiring writers is to make plenty of time for reading: “I’ve a feeling every author’s path is a different one. However, I do believe in one powerful basic thing and that’s reading. Make time to read, even if it’s five minutes a day, and it's the coffee mag at the local dentist’s surgery! Give yourself that time. Writing is a little like using a muscle, so the more of it you do, the stronger it gets. I wrote two books before I did a creative writing course with Curtis Brown Creative, and I do wish I’d taken the leap a little sooner. It provided names for a lot of what I was guessing at the time, such as ‘character arcs’. I also met the inspiring children’s author Catherine Johnson, and my fabulous writing group, who have proven to be the best writing friends and most amazing support throughout Book of Fire’s journey: www.thescribblersonline.com.”

Speaking about the authors who have influenced her, Michelle added: “John Green is a huge YA inspiration, as are Sarah Crossan, Jessie Burton, Rainbow Rowell and Cassandra Clare. I’ve also had a pretty consistent love affair with the Brontes, Jane Austen, E M Forster and Ian McKewan for as long as I can remember.

“I was the absolute definition of a shy bookworm growing up and loved anything that had a sense of mystery and adventure - so pretty much everything by Enid Blyton and Carolyn Keene, as well as plenty of classics like Ballet Shoes, Anne of Green Gables, The Diary of Anne Frank, The Secret Garden and the CS Lewis series (all interspersed with a lot of Roald Dahl).”

It is hoped that the second book in the series will be out early next year and you can join in the Book of Fire community on Facebook, at https://www.facebook.com/BookofFireMK/ , Twitter at @mkenneypr, and you can find Book of Fire on Amazon at http://bit.ly/BookOfFire