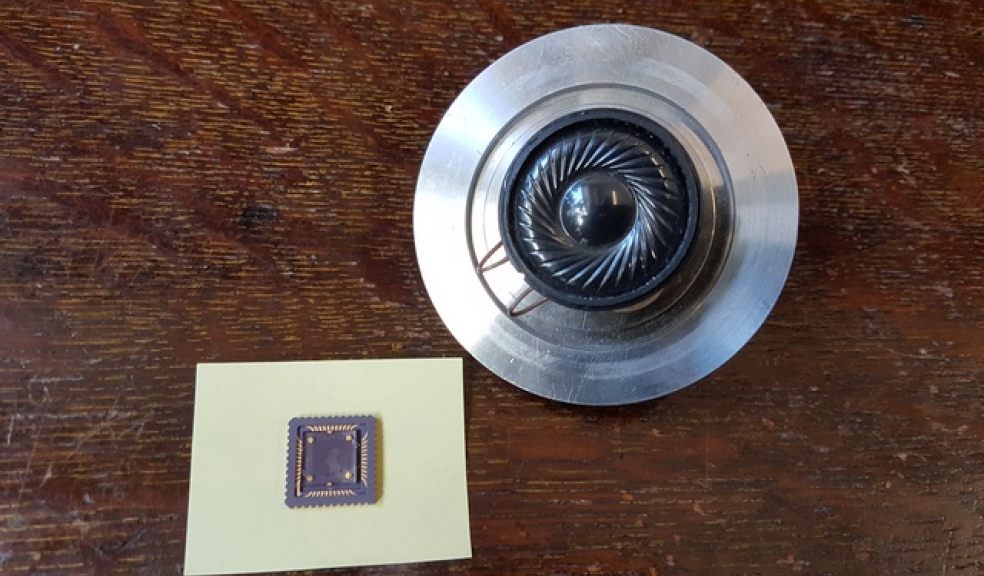 A pioneering new technique that encourages the wonder material graphene to “talk” could revolutionise the global audio and telecommunications industries.

Researchers from the University of Exeter have devised a ground-breaking method to use graphene to generate complex and controllable sound signals. In essence, it combines speaker, amplifier and graphic equaliser into a chip the size of a thumbnail.

Traditional speakers mechanically vibrate to produce sound, with a moving coil or membrane pushing the air around it back and forth. It is a bulky technology that has hardly changed in more than a century. This innovative new technique involves no moving parts. A layer of the atomically thin material graphene is rapidly heated and cooled by an alternating electric current, and transfer of this thermal variation to the air causes it to expand and contract, thereby generating sound waves.

Though the conversion of heat into sound is not new, the Exeter team are the first to show that this simple process allows sound frequencies to be mixed together, amplified and equalised - all within the same millimetre-sized device. With graphene being almost completely transparent, the ability to produce complex sounds without physical movement could open up a new golden generation of audio-visual technologies, including mobile phone screens that transmit both pictures and sound.

The research is published in leading journal, Scientific Reports.

Dr David Horsell, a Senior Lecturer in the Quantum Systems and Nanomaterials Group at Exeter and lead author of the paper explained: “Thermoacoustics (conversion of heat into sound) has been overlooked because it is regarded as such an inefficient process that it has no practical applications. We looked instead at the way the sound is actually produced and found that by controlling the electrical current through the graphene we could not only produce sound but could change its volume and specify how each frequency component is amplified. Such amplification and control opens up a range of real-world applications we had not envisaged.”

The new applications the team have in mind include ultrasound imaging, for use in hospitals and other medical facilities in the future. The known high strength and flexibility of graphene would allow intimate surface contact leading to much better imaging. Moreover, the fact that the acoustic devices the Exeter team have devised are simple and cheap make such concepts as intelligent bandages that monitor and treat patients directly a real possibility.

Dr Horsell added: “The frequency mixing is key to new applications. The sound generating mechanism allows us to take two or more different sound sources and multiply them together. This leads to the efficient generation of ultrasound (and infrasound). However, the most exciting thing is that is does this trick of multiplication in a remarkably simple and controllable way. This could have a real impact in the telecommunications industry, which needs to combine signals this way but currently uses rather complex and, therefore, costly methods to do so.”

‘Multi-frequency sound production and mixing in graphene’ by David Horsell and Mark Heath is published in Scientific Reports.