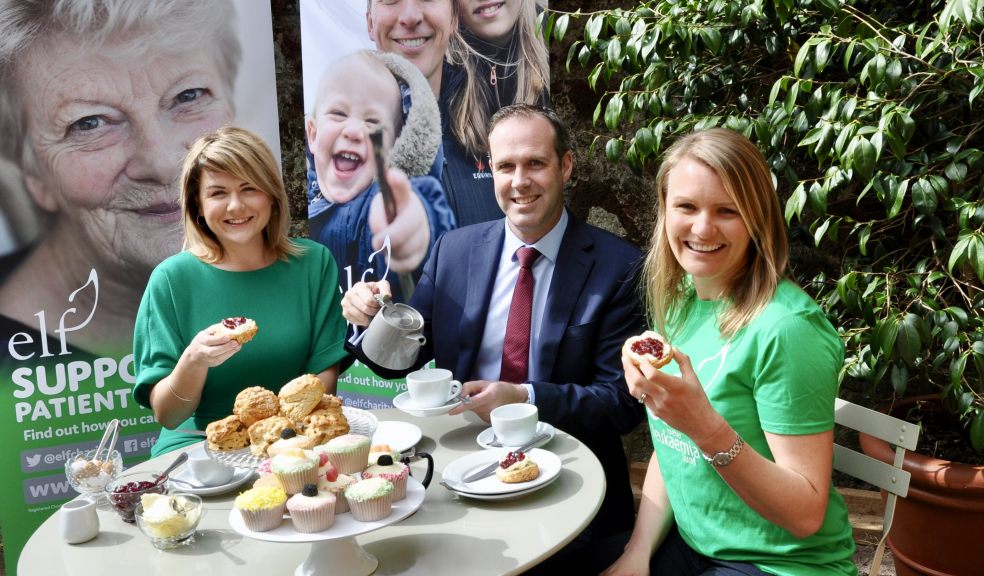 The Exeter branch of Brewin Dolphin; a leading wealth management company, has selected Exeter Leukaemia Fund (ELF), as its new Charity of the Year, which is celebrating its 30th Birthday in 2017.  Jon Crompton and Rhiannon Cox from Brewin Dolphin, joined Alison Upton of ELF to enjoy a cuppa and delicious cakes served in the private courtyard of Cakeadoodledo, located next to Exeter Cathedral. The scrumptious cake and scone extravaganza launches the new ‘ELF Cream Tea’ campaign, running throughout the month of June.

Every week in the Exeter area, 600 people visit ELF at the R D & E Hospital in the Yarty Ward.  Money raised from the cream tea events held, will fund the charity’s vital work across Devon, supporting families affected by blood cancers and blood disorders, such as leukaemia, lymphomas and myelomas. A diagnosis is life changing and can result in considerable time being spent in hospital, if not years of treatment. ELF aims to lighten the load for patients when they need it the most.

Jon Crompton – Divisional Director, Brewin Dolphin Exeter Office said: “This is the 5th year we have had a Charity of the Year, and ELF beat off stiff competition to be selected for 2017. We are delighted to be part of the launch of their innovative ‘ELF Cream Tea’ campaign and congratulate them on their 30th anniversary. The Brewin Dolphin team are looking forward to getting fully involved to help raise funds and awareness of the crucial support services provided by ELF for families affected by blood cancers and blood disorders across the region.”

Support from local businesses, such as Brewin Dolphin, makes a huge difference to the lives of families by this disease across the region.  Alison Upton – Fundraiser ELF said: “At ELF, we work with a variety of companies who have raised thousands to support the vital work we do.  We find that supporting a charity really motivates staff, often bringing them together as a team achieving a goal that is totally unrelated to their day to day jobs.  We are thrilled to be working with Brewin Dolphin in 2017 and are looking forward to an action packed fundraising year.”

Throughout the month of June 2017, the charity is encouraging businesses, organisations and individuals, to hold an ELF ‘Cream Tea’ event to raise money for this worthy cause.  Local Michelin Star chef Michael Caines MBE, is the face of the campaign and you can see his best scone recipe on ELF’S website www.elfcharity.org.uk/creamtea, together with tips on how to make your cream tea event even better.

Alison Upton ELF comments: “People will be sent an event pack and then organise their own event. These will vary in size between someone having a few friends round for a cream tea to larger public events and work based events.   Promotional partners include Darts Farm, The Coffee Company, and Scribble & Ink who are helping to spread the word.  We already have some individuals and companies, such as Brewin Dolphin who have said they will take part, and we are also encouraging tea-shops and cafés across the region to get involved by donating what they can, from each cream-tea they sell.  Every penny raised will make a huge difference to our support to patients.”