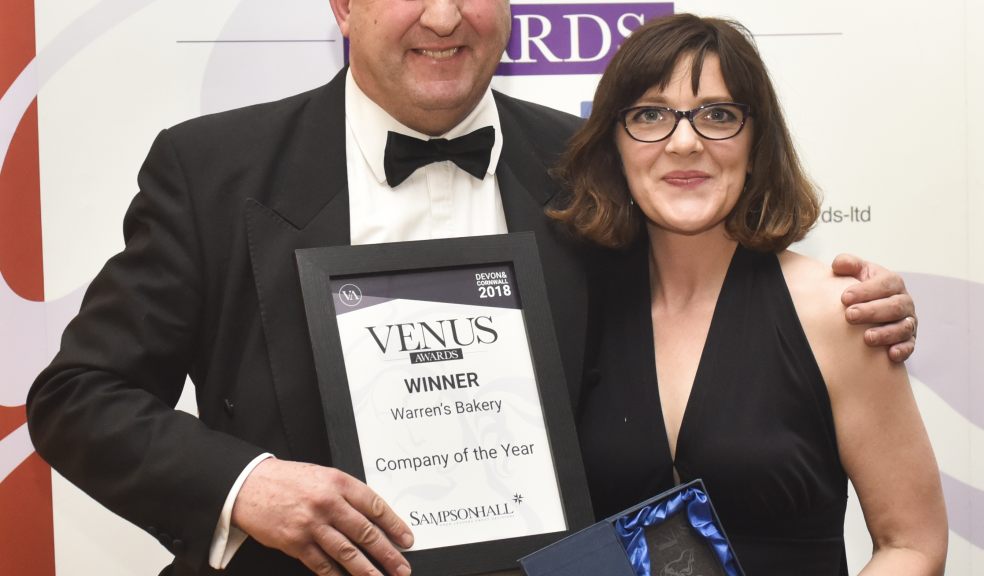 Warrens Bakery is delighted to have been recognised as ‘Company of the Year’ in the 2018 Devon & Cornwall Venus Awards.

The most inspirational women and businesses across the Southwest came together, with more than 250 guests attending the awards ceremony that took place at the Crowne Plaza Hotel in Plymouth, on Friday 27th April.

The World’s oldest Cornish pasty maker and Cornwall’s oldest bakery adds the Company of the Year Award to a growing list of accolades. The Venus awards, returning for its fifth year, recognise inspirational women and businesses in the region which specifically have female equality, diversity and innovation on their agendas.

Victorious in the regional ‘Company of the Year’ category, which is for female friendly companies with 50 employees or more, the premium craft bakery is now off to represent the region in the National Finals, taking place on Thursday 12th July in Basingstoke. During the National Finals, Warrens Bakery will be competing against winners from the rest of the country in a bid to be crowned the overall ‘Company of the Year’.

Women make up 62% of the Warrens Bakery workforce from director level, leads of departments, brand ambassadors, store staff, area managers and production team leaders and as such they recognise the importance of promoting equality within the workplace, fair pay and career progression. Women are pivotal to Warrens Bakery’s success and continued growth.

Aiming to be engaging in all areas of business, with the ability to be flexible, all-inclusive and promote equal opportunities, Warrens Bakery are proud to have created flexible working for many areas of the business, to allow their employees to do business in the best way.

Louise Moye, Head of Marketing at Provenance Brands which includes Warrens Bakery and some of Cornwall’s other most exciting brands, says: “To accept the award on behalf of Warrens Bakery was an extremely proud moment. For the business and all of the inspirational ladies who work in it, it is an incredible achievement. At a time when Warrens Bakery is expanding at a rapid rate nationwide and with plans to open 750 stores across the next five years, it is a particularly exciting time for the business. The recognition from the Venus Awards therefore couldn’t be timelier.”

Louise continues: “The award is particularly pertinent as Warrens Bakery was founded on the love story of Miss Harvey, the daughter of the local St. Just baker and Master Warren, a farmer’s son. The local Warrens farm provided the ingredients fresh from the fields and the Harveys made the pastry and baked the pasties. It’s humbling to think over a hundred and fifty years later, Warrens Bakery has now been acknowledged for their women in business.  We were thrilled to be a part of the awards and thoroughly enjoyed meeting the other inspiring finalists. We’re all now looking ahead to the National Finals!”

Founded in 2009, the Venus Awards was created to applaud and reward working women.  Their mission to empower leaders, is driving a far-reaching movement of change throughout Devon and Cornwall.  The awards reach out to women carrying out all manner of work at all levels of small, medium and large businesses and organisations in the local community.  They help to empower the less confident employee, support the high-achievers, continuously encourage the lonely entrepreneur and constantly strive to inspire everyone they touch.

Established in 1860, Warrens Bakery is officially recognised as the World’s oldest Cornish pasty maker and one of the UK’s top three British craft bakeries.  With a rich heritage and an array of hand-crafted sweet and savoury bakes, the craft bakery puts a firm focus on provenance, hand crafted skill and innovation.  They have 60 stores throughout Cornwall, Devon, Somerset, Manchester, the Midlands, Hampshire, Oxfordshire, Essex, London and Sussex.  Their hard work and dedication over the years has seen them receive a long list of accolades including finalists in the prestigious Craft Business Award in the Baking Industry Awards 2015 and 2017.

To find your nearest local Warrens Bakery, visit www.warrensbakery.co.uk and to hear the latest news follow them on Twitter (@WarrensBakery) or link up with them on Facebook www.facebook.com/warrensbakery.  To find out more about the Venus Awards visit www.venusawards.co.uk.