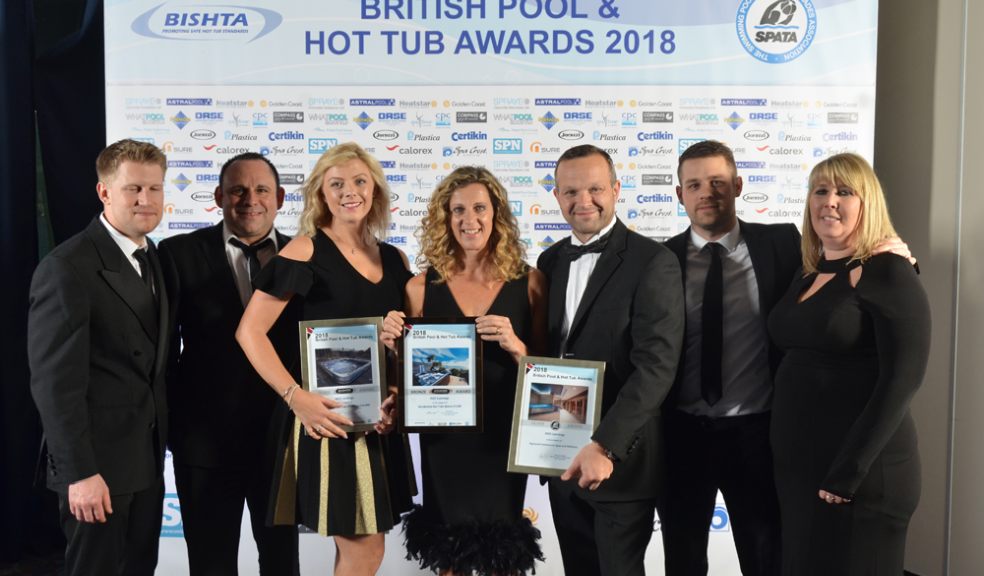 Cannings H2O based in Exeter, Devon are celebrating after collecting two Silver and a Bronze Award at the prestigious British Pool & Hot Tub Awards, hosted by BISHTA and SPATA, held on Tuesday 30th January, at the Ricoh Arena, in Coventry.  The British and Irish Spa and Hot Tub Association (BISHTA) and the Swimming Pool and Allied Trades Association (SPATA) are the relevant bodies upholding standards within the Wet Leisure Industry. Rebranded in 2015, the first BISHTA awards were won in 2008, while the first SPATA awards were won in 1978. These well-established awards are the UK’s number one wet leisure industry accolades.

The BISHTA and SPATA awards were presented to Cannings H2O for the BISHTA categories; Residential Hot Tubs below £7,000 (Bronze) and Residential Hot Tubs £7,000 to £14,000 (Silver). The BISHTA awards categories were sponsored by Complete Pool Controls, Jacuzzi Spa and Bath Ltd, Spa Crest Europe and SpaTime by BAYROL. The SPATA award was won by Cannings H2O for the category; Inground Commercial Spas and Wellness (Silver).

Bradley Cannings of Cannings H2O commented: “We are thrilled to be recognised at the 2017 British Pool & Hot Tub Awards by both BISHTA and SPATA. This is a wonderful acknowledgement of our capabilities and those of our committed team. Our award wins are a testament to our entire team’s dedication and professionalism”.

The British Pool & Hot Tub Awards aim to recognise the achievements of the wet leisure industry, by showcasing the best examples of design, construction, installation and innovation and entries are received nationwide from members.  BISHTA and SPATA set standards governing the installation, construction and operation of hot tubs, swim and exercise spas, pools, spas, saunas and steam rooms, respectively. Along with establishing a Code of Ethics by which their members abide, the Trade Associations give a voice to the industry at home and abroad. With nearly thirty award categories, the British Pool & Hot Tub Awards reflect the different types of spas, hot tubs and pools to suit all kinds of budgets.

Entering the British Pool & Hot Tub Awards also opens the door to Europe, as award-winning companies are eligible to be shortlisted for the European Pool & Spa Awards hosted by EUSA (European Union of Swimming Pool and Spa Associations). Winning these awards shines a spotlight on the UK winners raising their profiles in the UK and across Europe.

The British Pool & Hot Tub awards are held at the Industry Gala Evening during SPATEX, the UK’s largest Pool, Spa and Wellness Show.  SPATEX is an exhibition that sees companies from across the UK and overseas, promoting their products and services, along with a chance to network with colleagues. SPATEX is not only the UK’s largest, but is also the longest running, dedicated swimming pool, spa, and wellness exhibition. SPATEX is in the Ericsson Exhibition Hall, Ricoh Arena, Coventry from 30th January to 1st February 2018.