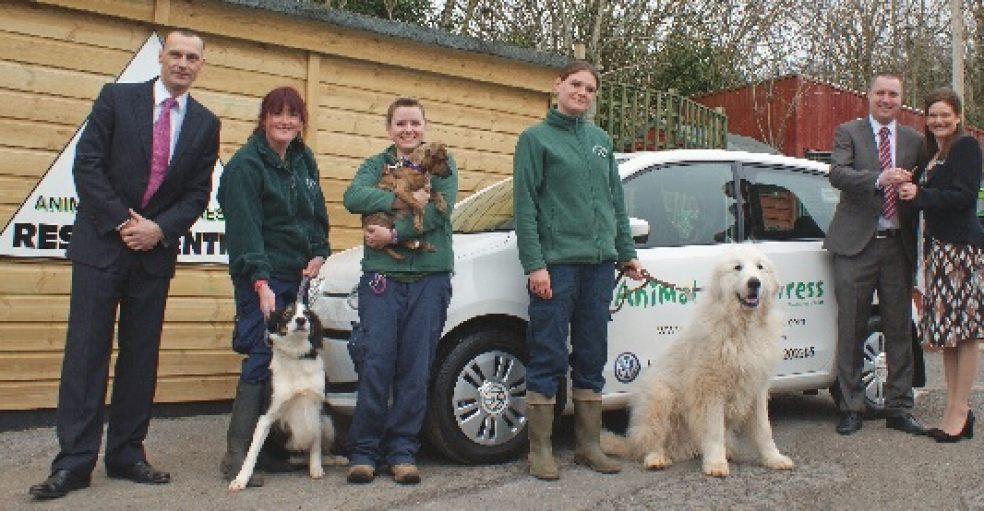 A leading local motors business is helping keep a South Devon animal charity on the move by sponsoring a brand new car.

Murray Volkswagen, Newton Abbot, has presented a new Volkswagen up! to Animals in Distress, where it is set to cut a dash travelling between the charity’s 13 shops in towns including Bovey Tracey, Dawlish, Brixham and the newly opened Dartmouth shop.

Handing over the keys at the charity’s Ipplepen rescue centre were Kevin Murray, managing director of the Murray Group and David Lay, sales executive at the Newton Abbot Volkswagen dealership.

"We are so grateful to Murray Volkswagen for our new up!"

"As a charity we rely very much on volunteers, so being able to travel between our 13 shops in a reliable, fuel efficient Volkswagen is a great financial saving to us."

"We are really proud to have the Murray Volkswagen name and logo alongside ours and hopefully the car will become a regular and welcome sight zipping around South Devon."

"Murray Volkswagen is always looking at new ways to support the local community, and we were amazed by the incredible good work carried out by Animals in Distress across our region."

"It is a privilege to be able to help the charity with its day to day transport issues, and we hope that the new up! proves a popular addition to the team."

Animals in Distress was founded in 1981, while its rescue centre opened in 1994 and re-homes about 1,000 unwanted domestic animals a year. Animals arrive at the centre for a variety of reasons including bereavement, illness, financial reasons and neglect.

Murray Volkswagen offers new and approved used cars for sale as well as a comprehensive aftercare service. To find out more visit www.murray-group.co.uk/volkswagen or call Newton Abbot Volkswagen on 01626 202 205.